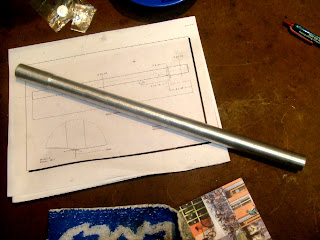 Klunkerz Project Update: Well a major hurdle in the Klunker project was cleared when a co-worker of mine called in a favor owed to him and got me this 410mm seat mast machined out of solid aluminum billet for free! (Thanks Mark P.!)

Yeah, pretty much like a late 70's era klunker, as far as I can tell. There are still some big hurdles to leap over yet though. I need to source a crankset, possibly a tubular BMX style cruiser fork, and decide if I want to braze on some canti studs, or get some Sturmey-Archer drum brakes, (which could influence whether I keep the flat blade fork or not). I actually have some gold ano Ukai wheels for it that are laced to a Sturmey-Archer 3spd rear hub and a SunTour high flange front hub. I found some BMX levers from back in the day with white plastic covers too, which I could use for the brakes. Oh! And I can not forget that the frame needs some brazing work, as well. 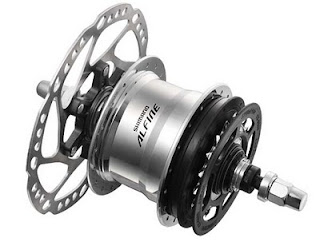 This Hub Goes To Eleven! Yeah, I know! Old cliche'! But anyway, the Alfine hub is changing for 2011. It will be a 11 speed hub with a wider gear range and will go to an oil bath lubrication for the internals. I've always thought a winter commuter/gravel rig set up this way would be the bees knees.  I'll be keeping an eye on the availability of this. I almost popped for the Alfine 8spd version, but the lack of a really low gear kept me off it. Now Shimano claims this Alfine variation will dip into a lower range than the current 8spd. one does. 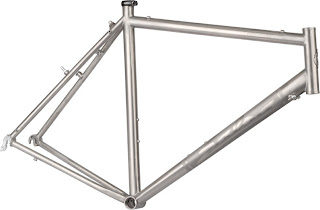 Salsa Cycles Announces The Titanium La Cruz: I have already posted a blurb about this on Gravel Grinder News, so I won't go all into the tech stuff. I'll just give you all my two cents on this deal.

Salsa Cycles came out with the steel La Cruz with disc brakes awhile ago. I have almost been tempted several times by that bike, but in my mind, the disc part was overkill and unnecessary for how I would have used the bike, which was for gravel road riding and paved road riding. To my mind, if you want disc brakes, tons of clearance, fatter tires than a typical cross rig, (read above 34mm), and the versatility of being able to go off road all dressed up in a drop bar specific package, you go to the Fargo. Then the Vaya hit the scene recently, and to my mind, it was too much Fargo and not enough of a lightweight road influenced gravel flyer. I guess the Vaya is to the Fargo what Miller Lite is to a good IPA. But that's just me.

Now when I saw Joe Meiser go to the front on that titanium cross bike in T.I.V5, and I realized what I was looking at was a titanium Salsa proto, I figured someday we'd see the rig bow as a La Cruz or Chille Con Crosso titanium rig. I'm glad Salsa chose the La Cruz moniker and the tire clearance that the name is known for. This is the gravel weapon I was thinking of. Light, titanium ride quality, plenty of room for 38's, and it doesn't appear to have a dinky head tube. Cantilever brakes work just fine on gravel, and are in keeping with the light theme set out by the gray-ish metal the frame is worked up in. Not to mention, I have become enamoured of the way titanium can ride of late, no thanks to Lynskey!

Get me some carbon clinchers, a tubeless set up, and some nice SRAM Rival group action and I would have "near perfection" for gravelly goodness here. Near perfection? Yes. It is missing single speed-ability and the price! Well........what do I expect? It is titanium after all!
Posted by Guitar Ted at 1:00 AM