Frostbike is a dealer only open house held by Quality Bicycle Products every winter. That's what the short story is, but it doesn't really tell the story. It's more of a "family reunion". An excuse to get together with a whole bunch of bike freaks and misfits. It is a much needed infusion of bicycle culture in the midst of a long cold winter. A two wheeled version of caffeine for the bike persons soul. Good stuff!
I couldn't possibly begin to tell the whole story of the weekend's adventure, nor post the 78 photos of stuff that happened outside of QBP's walls during the weekend. I can not even begin to hit all the highlights in one post. So, here is a very tiny view of what was going on in my world over the past weekend. It was a good thing for the soul! 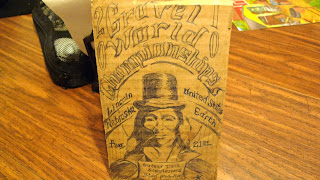 First off, I found out my two hand made drawings, one of MG and the other one my entry into Gravel Worlds, at left, made it safely to their destinations, which I was a bit releived to know. So, with that knowledge in my mind, I was set to head up north to see Ben Witt at Milltown Cycles. I got there plenty early, so I had some time to wheel around on one of his Drakkar bikes and chat with Ben at my leisure. When Ben was ready, we headed to Northfield, Minnesota.

That's where Ben grew up and used to work at another bicycle shop called Mike's Bikes. Mike's is the place where we went last year and the same folks were there again this time to share in some good times drinking a few beers, eating Greek style pizza, and zooming around the shop on all sorts of wacky rigs. 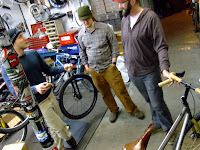 We were joined by Ben's fellow co-worker Curtis and another fellow whose name escapes me now. (Lots of beer will do that to a guy!) Anyway, we would chat awhile, and then the next thing you know a few guys would be zooming around the shop on anything from a 29"er, to a Pugsley, to a 20" Mongoose Moosegoose prototype. Fun was had, and lots of stories were told.

Mike's Bikes is one of those "lil bits o bike shop heaven" for gear freaks and cycling fans. In every corner, you just never know what you might turn up. Early 80's fillet brazed Fisher Montare? Yep! How about a 30's era Schwinn Excelsior frame? Or a few of them? Yep! How about the odd Superfly carbon frame hanging from the wall in the corner? Yep! Or, how about a NOS Kos Cruiser with rasta Bullseye hubs? Yep again.

After the evening was over, I spent the night in Northfield at Ben's parents house, (mucho gracias!), and the next day I went to the expo at QBP. Spent the day there re-connecting with friends and pretty much was pinned down at the Salsa Cycles booth all day. In the evening, Ben, Jason B, Marty, and I all went out for some Thai grub and a visit to Minneapolis' newest bike/coffee bar called the Angy Catfish where they were having a party called The Cutter's Ball. 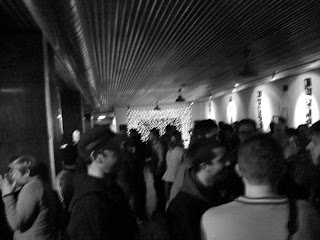 We arrived early and the place was wide open. They had a musical outfit playing some really loud tunes called "4 On The Floor" which featured a drummer, bassist, and two electric guitar players each set up with their own kick drum which they lined up in a row in front of the "stage". Pretty unique to say the least!

Later on it got pretty packed, and memories of 20 years ago were coming back when I used to crash live music bars all the time. Well, we are all a bit older and wiser these days,(plus we all were going back to QBP the next day), so we bagged it about 11:30pm and headed to the shed.

The next day I went back and hit up some folks I missed the previous day, picked up a frame and fork for testing on Twenty Nine Inches, (TBA later), and hit the road for home. All in all a great time and fun was had by all. 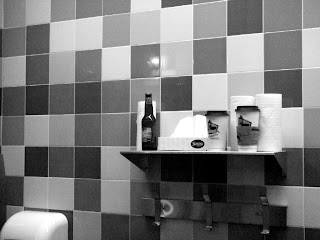 I leave you with this final image from an undisclosed restroom in the bowels of QBP. The two coffees belonged to myself and a friend. The beer? Well, let's just say this pic is from Sunday morning and "The Borg" would not be pleased.

Thanks to the Witt Family, Ben Witt, Marty Larson, Mike, Stuart, Jason Boucher, The Salsa Crew, The Boucher Family, Jeff Kerkove, QBP, and The Angry Catfish, Twin Six, and all who played a part in making this Frostbike quite enjoyable and memorable. If I have forgotten your name, I apologize. I'm still a bit fuzzy!
Posted by Guitar Ted at 1:00 AM