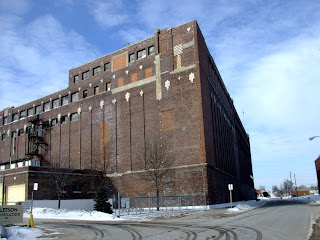 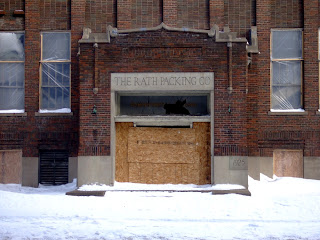 Saturday I got out and did a bit of riding. A combination of an "urban decay" ride and a nice ride in some wilderness on some packed snowmobile trails.

First, the urban decay. These pictures are from the defunct Rath Packing Company that was located on the north side of the Cedar River near downtown Waterloo.

The big, monolithic building shown on top is where the animals were processed back in the day. I remember the last days of Rath's operations were when I came to live in Waterloo. If the wind was out of the Northeast, the stench from the kill was overwhelming. I really do not miss that part!

The other picture here is of the old entrance to the Administartion Building across the street from the first building pictured here. Note the date of 1925 on the facade.

I find this sort of scene ironic and sad. Ironic because Waterloo is in an area known as "Silos and Smokestacks" which is supposedly in existence to save stuff like Rath Packing's old structures and make them some sort of tourist attraction. Yeah.....right! Wherever that money went to/is going to, it isn't going to save anything here. These buildings are now used to store ice and are literally chipping away into tiny flakes. I saw several on the street as I rode by. These buildings are literally crumbling into dust before our very eyes, and there is a Federal Park set up that is supposed to take care of this? Amazing. (In essence, Silos and Smokestacks is basically a league of pre-existing museums, barn attractions, schoolhouses, and historical sites. Not what they originally said it would be.)

That's the irony. The sad part is that we used to make stuff here. That is what this represents to me. We used to employ hundreds of people to make stuff that is now made overseas. Why is that? Too many ways to answer that one, but I think we need to figure out how we can become a nation that makes things again. My opinion. Now enough about that! 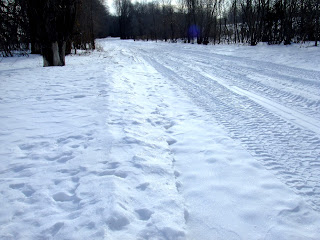 The rest of the ride was on these packed in snowmobile trails I found along the Cedar River further East. The trails were hard, crisp, and fast. If I wandered too far off the beaten path though, I sunk and came to a grinding halt. It was so cold that the snow crystals tearing apart under my 2.4" Ardents were making a really loud noise.

The trails weren't all that long, so I found a loop and went all the way around to lengthen it out as much as possible. 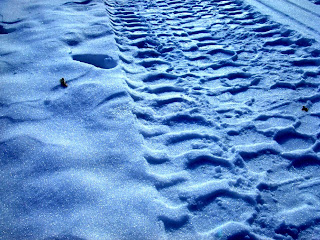 It is pretty amazing. In the photo at the left, if you rode where you see the tracks you were fine. If you got over there to the left, where the snow was undisturbed, you sunk down several inches and came to an abrupt halt.

I learned to stay on the tracks pretty quickly!

I can really see where things like Pugsleys and Fat Back bikes are appealing. We are having a banner winter for such a bicycle, but I am resisting getting one because I know that this probably is an aberration and we'll be returning to brown, snowless winters again. Well, I know that would happen if I got a snow bike! That's the way it goes, seemingly. If I stay away from getting one, it'll be snowy and cold 8 winters out of 10 for the next decade probably! 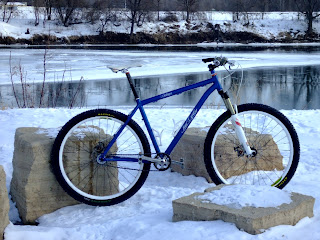 Here's the Dillinger all set up with 2.4 inch Ardents now. I probably should have just went with a rear 2.4 from the get go. That weak, dead 2.25"er was a time waster. It is so obvious that Maxxis has beefed up the 2.4 and changed the bead to interface with rims better that I do not understand why they just don't come out and say this is tubeless ready, because it is.

I ran the tires at 30psi rear and 25psi front which out in 8 degree Fahrenheit temps is "somewhat lower psi". At any rate, the tires gripped really well and that wide P-35 rim kept me up on top of the snow where the snomobiles and 4 wheelers had been riding. I rode about a hour and a half, and stayed pretty warm. I got the usual amazed and disdainful looks from the locals. Ah well......I was having fun, so I don't care!

The RAGBRAI route was announced Saturday. Looking for a gravel road alternative? Check out this.
Posted by Guitar Ted at 1:00 AM