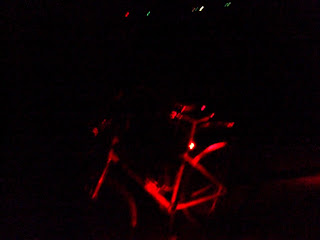 David Pals and I did another stint of night time gravel grinding and despite the heavy rain earlier in the day, it wasn't too bad out there.

We headed out of Toledo again, and I had a route sort of planned in my head, but once again it was foiled. Oh well! We found some pretty cool roads though.

The one thing about riding in Tama County is that you don't get that leisurely pace where conversation comes easily. Too many hills one right after another! We're either huffing it up a steep hill, or we're hanging on as we fly down the other side, catching our breath before huffing it up one more steep hill and starting the process all over again! 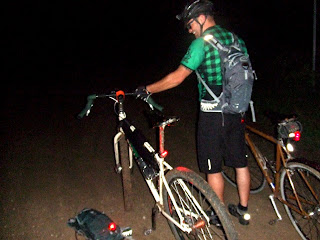 That's why we have the "art of the stop" down pat. We will stop, catch our breath, turn off the lights, and just soak it all in. The fire flies are spectacular right now, by the way, and the night time sky is always awe inspiring.

Then it's decision time on what way to go. We pick a direction, sometimes talking it over, others with no verbalization at all, and we go on for awhile, huffing, coasting, repeating, until another stop.

The roads seemed to get progressively worse on this ride. We found a B road, and that was actually ride able, but we found a gravel road afterward that was so thick and sloppy, we had to pedal going downhill! Now that just ain't right! 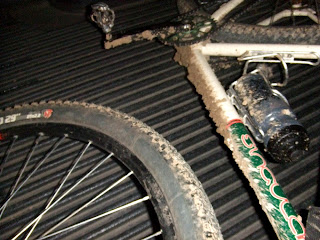 The road was so slow, and energy sapping, I thought I must be paying penance for T.I.V6 or something! I at least got a taste of the flying mud on the downhills, and the grinding, slow going everywhere else.

Well, we cut the route short a bit, since we were working so hard anyway. David and I chatted for awhile afterward, and then we made our separate ways home. I'll miss the night rides for a bit. David is doing Trans Wisconsin, and I'll hopefully be in Minnesota. Might be a bit before the night time gravel grinders get going again, but we'll get back to it.

I just hope the roads are drier next time!
Posted by Guitar Ted at 12:31 AM

Fun stuff! Thanks for the ride.

Looking forward to seeing/riding with DP for few days during TransWisconsin and both of you during the Death Ride. Have fun on the Fargo ride. :)