Women And Bike Shops: A Problem Or Part Of One? 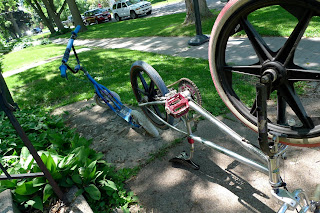 I've seen some chit-chat on the internet, in the shop I work at, and in a trade paper regarding the problems women have in local bike shops getting snubbed, getting poor service, or being observed as attractive members of the opposite sex rather than customers.

No doubt this all occurs and should be frowned upon, looked into, and eradicated as much as humanly possible. However; may I suggest something that may seem a bit radical? Something a bit different that nobody I have read or talked to seems to be seeing here?

It is a people problem. A human relations issue. It isn't gender specific either. Heck, I've been snubbed in bike shops. I've been treated with condescension, and even been "eyed up" before in a bike shop. And if you haven't guessed yet, I am a male.

Yes, cycling is full of males, not so many females. That is true. However; I've worked with plenty of females in both bicycle shops I have worked at going back to 1993. Of course, this may be an odd situation compared to "normals", but I'm betting not so much any more these days. I think it is fair to say that there are more females in shops than ever before. Could be wrong there, but I am betting I am not.

Yet this discussion about females and cycling persists on many levels, so it can't be that having more females in cycling shops is the answer. It helps for sure, but it won't be the answer. Wanna know why? Because in our culture the way we see females is whack, that's one big reason why. Another big reason is because a lot of women find cycling dangerous, and well.........it hurts and it is stinky. There are guys that don't buy into cycling for similar reasons. And you know what? They are right. It is dangerous and it does hurt and it is "stinky".

So shall we just give up? No, I think it can be and should be better. Cycling can be made to be more comfortable for most, definitely more safe, and well..........probably less stinky. But let's get back to the bigger picture- Human relations.

Human relations is where bicycle shops are wanting. There are big challenges that local bike shop owners face regarding this, but think about this- If the staff at a bicycle shop can relate to humans- be they male or female- on a fair and equitable basis with courtesy and kindness, yet being experts in cycling and staying "in charge" of the transactions going on in the store, then females would get along with bicycle shops just fine. As would everyone. Don't you think?

Now the obvious thing about the previous paragraph is that most local bike shops would barely get an employee trained before they had to go back to school, or the "season" was over and they had to be layed off again. It is somewhat unrealistic to expect what amounts to being "temps" to do the job that a committed "lifer" would do in a bicycle shop setting. Could it be better? Yes, but maybe, just maybe, everyone's expectations are set a bit too high here in terms of the bike shop world.

Sometimes I think we expect governmental and commercial institutions to solve issues that are cultural, moral, and value based and I think a little of that applies to this bike shop deal, and in other areas of our society. Can bike shops, and more specifically, the people that work in them, make a difference? Heck yes! But it runs deeper than that, and it is more personal than that. Oh yeah..........and more spiritual too.

So in the end, yes- Women are getting poor treatment at some bicycle shops, women are not being attracted to cycling like they could be, and are not being treated fairly at events like they should be. But it isn't a deal that is going to be "solved" by the "cycling industry", "bicycle shops", or what have you. It's going to take more than that. It's going to take people changing and individuals deciding they want to treat others "right". Whether they are in the cycling industry or not. Then you'll see some definite change for the good.

I couldn't have said it better myself. Thanks for putting it out there in real terms!

Rant ON:As someone dedicated to drawing more women, particularly middle-aged women, to the activity of cycling, I see this situation as laughable. For one thing, it really speaks to the 'business sense' in these bike shops or lack thereof. OK, so it's sexy to cater to the hot, athletic, lean young racer. But let's just look at economics. Middle-aged women typically are well-established, have more disposable income and the drive to buy. At some point, someone is going to find a business model for this very large, female baby boomer demographic and will be laughing all the way to the bank while the snooty, testosterone-laden bike shop attendant who doesn't have the time of day for the female customer wonders where he went wrong.
Sheryl Keeme, Girlsgoneriding

@Luvgr8mnds: (aka Sheryl Keeme)- Well, your "demographic" would be well served if everyone treated each other with respect, no? (I think you would agree with that)

So, you see my point is that it isn't just "snooty, testosterone-laden" bike shop attendants. It's people. It's our society.

You may see someone come along and attract the 'middle-aged woman" and "laugh all the way to the bank", (which suggests to me that you are thinking the motivation is money, and not being kind to people), but no real change is going to happen just because one marketing genius finds a way to tap into an under-served market.

See what I mean?

Yes, there are bad bike shops, terribly insensitive people working at some of them, and these shops give everyone a bad name. But to think that the way women are treated in bike shops is going to change because of a few entrepreneurs that are savvy to the cause is just being naive.