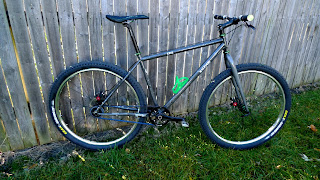 I don't know what it was for sure.  I just know it was loud, and I am back to ground zero as to my confidence level. The noise occurred in such a manner that it only served to add to my uncertainty about riding with "The Belt".  Here's the deal so far.....

I had been pretty gingerly using the bike to start out with. I don't know, but something about a single speed drive train letting go all of a sudden while I am standing and pedaling isn't appealing to me. Smak Pakage might be a cool name for a hardcore band, but it isn't a cool thing to have happen to the male anatomy, if ya catch my drift. However; I was gaining confidence in the whole set up as I climbed a dike, an embankment, and a long grinder of a hill, all with zero issues.

Along the way, I was tweaking the set up, just as I would on any new-to-me bike, and getting set for that big first dip into the woods. On that fateful day, I left work, and on the way to the trail head, I had to stop for traffic. With my "non-chocolate foot" in the primed and ready position, (see Hans "No Way" Rey for an explanation of what yer "chocolate foot" is), I pedal kicked down when the traffic parted ways to scoot across the street.

That's when it happened: Skronk!

Great! Just as I was about to put full confidence in "The Belt" in a true trail situation, I get knocked back to ground zero, and I couldn't figure out why it decided to make a noise then. Well, I kind of bailed on the idea of a full run, and did another shake down cruise with no further incident. Bah! Not very fun.

I'm so glad your posting about this. i had been looking at getting one for a while. but never saw any honest comments from a trusted source.. keep up the good work. You sir ara a scholar and a gentlemen.

shaft drive is where it's at. that would solve all our problems.