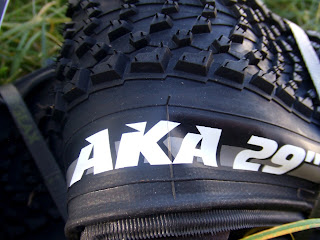 Geax's Latest 29"er Tread: Here is a tire I chose as one I thought would be a great hit here in the Mid-West that was introduced at Eurobike last September. The Geax AKA.

Well, I happen to have a pair now and have just started to ride them. This tire is from the "Smallblock 8" mold: Very rounded, voluminous casing, with a ton of smallish knobs arranged in rows across the face of the casing. Like  a Velcro kind of approach, tires like these are best on buff, smooth, and less technical trails where the multitudinous knobs can continually rip into the trail surface. However; throw down some acorns, or gravel, or similar features, and goodbye lateral traction. Best not to be caught in a corner when that happens!

I suspect these will be somewhat like the recently tried Bontrager XR-1's, but I can tell you already that these tires are 150 grams heavier, and don't roll as well as XR-1's, just from my first two rides on them. The Geax type tire, be it TNT or folding, is curiously heavy, stiff, and way durable. These look to be that way as well. I'll chime back in with more later..... 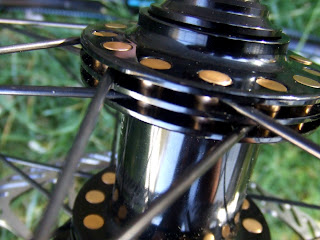 Cole Wheels: Locals might remember when Jeff Kerkove was sponsored by a little known wheel maker named Cole Wheels. They featured a funky looking hub with weird looking barrels that the spokes threaded into and then went straight to the rim and were connected there by the traditional nipple in the rim.

Well, these cats are making a 29"er wheel set these days, and I have been sent a pair to test on Twenty Nine Inches. First of all, contrary to popular belief, those gold colored "barrels" are not brass. They are anodized aluminum, and although they look heavy, they are on par with about any mid-level wheel set out there. (These MSRP for about $700.00) Modern features like tubeless compatibility with a tape from Caffe Latex, convertible front hub to 15QR, and crazy smooth Japanese manufactured bearings are all here. Did I mention these wheels spin for days? Smooooth!

More on these later, but so far, they seem quite well made and capable. 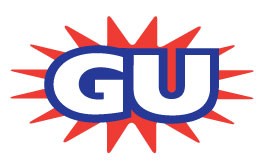 Trans Iowa V7 Sponsor News: Well, we've got more T.I.V7 sponsors on board now. Gu Energy is one, and they will be providing some nutrition for the event in rider's pre-race packets and at checkpoints. Man! Gu Energy has been around a long time now and they still make some great product for endurance athletes. I remember when I used their Banana flavored gel on a tour I was on back in the 90's. Good stuff.

We Also want to announce that we have signed on Clif Bar as another nutritional sponsor for Trans Iowa V7. They will also be sponsoring us with nutritional items that will be found in racer packets and at the checkpoints in limited quantities.

Keep in mind that while we are being sponsored by these fine companies that you shouldn't rely on their products to keep you going through to the finish. I am not demeaning them, or their stuff, but even they would tell you that a triple century plus is going to suck out more energy than you could ever hope to metabolize while you are in the event. This stuff is best seen as supplemental to your main sources of calories for Trans Iowa. Grab some "just in case". Use it as a bail out measure, but don't think you'll be able to live off this stuff, or that there will actually be anything there when you get to a checkpoint, if you get to a checkpoint. (And don't kid yerself Rookies. That's a pretty big "if"!)

Oh yeah, speaking of Rookies and Veterans. I am never surprised at the number of ways you guys and gals will use to get into T.I. For instance, a recent phone call from an old friend that I hadn't heard from in 10 years was made to me mainly on the basis that this old friend would have enough pull to get the person influencing this action into Trans Iowa "guaranteed". Suffice it to say that I told the person, via the old friend, that they could do it like everyone else was.

Message to would be T.I.V7 entrants: There is no "easy, guaranteed way in". Just give up on the schemes already! Send your post card on the correct date with the correct info, and hope you are in the front end of the line. Everybody has to do it the same way. An announcement will appear in about 10 days or so.

Have a great weekend and ride yer bikes ya'all!

GT, you need to just start compiling and posting about the weird efforts people are making just to get into the Trans Iowa event. Great stuff with coffee!

so, you're going to need another opinion on the AKA's. I'll be more than happy to try those out for you on a couple rides. really.