Trans Iowa V10 is about to happen. At 4:00am CST on Saturday morning about 100 guys and gals will be heading out on the roads from Grinnell Iowa to find their way, (hopefully), to Checkpoint #1, approximately 54 miles away.

It won't be an easy ride.

There will likely be mud, and wet roads, and certainly some wind involved somewhere along the route. Oh yes......and it will be very dark out until about 5:45am.  Then the dawn will slowly enlighten the roads, and the riders will be seeing their first sunrise of two possible on Trans Iowa's long, 336 mile, 34 hour time limit route.

And me? I'll be bouncing around in my truck, wandering along at a steady pace. It isn't much trying to sort out who is in the lead or what not when it is dark. All you can catch are the blazing LED's as they whisk themselves along the gravel roads. Number plates or recognizable faces cannot be discerned in the rural blackness until the Sun starts to blush in the Eastern sky anyway, so I just have fun by myself along the way in the dark. 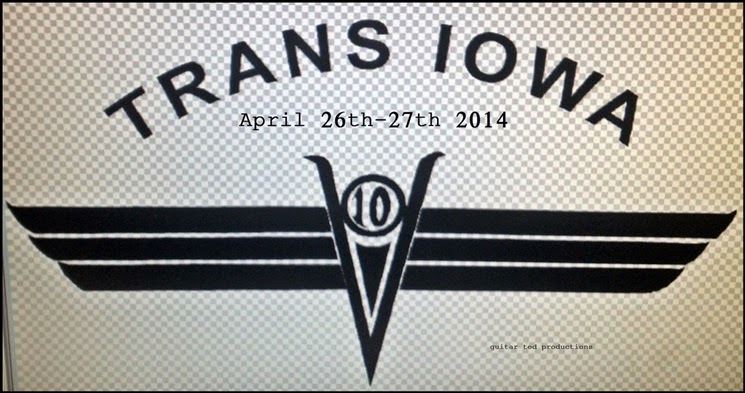 So, a lot of folks will be wondering what the heck I am thinking is going to happen with the event this time. Who looks good? What will the conditions be like this time? What will ten B Roads do to the pace of the event?

First of all, this Trans Iowa will not be like last year because of the weather. That means the pace of this event will likely be somewhat slower. The course got a steady, soaking rain for almost two straight days Wednesday and most of Thursday. Yes, we had very, very dry conditions ahead of this, so it won't likely be a devastating blow to the roads. However; it is very unlikely that any of the 10 B Roads will be at all rideable. We have one day of nice, warm Sunshine to dry up the gravels, but B Roads will certainly take longer. With cooler temperatures Saturday, it will help keep things moist enough, I think, to keep those dirt roads unrideable. We'll see........

Last year wind was a non-factor, pretty much. That will definitely not be the case this year. The course goes in every compass point direction at some point, so it will depend on where the wind is at their backs, and where it will be in their faces. I know what I know, and right now I'm keeping that card close to my vest. Stay tuned to Mountain Bike Radio's Trans Iowa Radio page for the reveal on that Saturday........

You never know who is going to put all the right pieces together to pull off a win at Trans Iowa. The "heavy hitters" could all have issues, like they did in V7 and V9, and someone that just kept pedaling and stayed on top of their bike could end up taking the big prize.

This time I feel that the person with a high degree of mental toughness has just as much a chance to "win" as the highly trained athlete. It's going to take incredible mental fortitude and wise decision making in the darkest hours to pull out the "W" this year. We're going to see some gritty performances for sure, and the roads and weather will shape this year's Trans Iowa in a much stronger way than they did last year. In fact, anybody that rides this one will be a "winner" in my view. This time the stakes will be higher and the challenge a bit tougher to chew.

Well, that's my take. Of course, as I said, I know the course. I have stated it has 10 B Maintenance roads in it. I think last year we had maybe three and they were all bone dry but for one, easily navigated mud hole just before Checkpoint #2. Last year we had almost no wind. Last year it was beautiful during the day, and the only difficulty worth mentioning was the miles of overnight fresh gravel and cold temperatures. I don't mean to diminish the accomplishments of any of last year's 31 finishers, but with a little added headwind and a little added moisture, the finishing rate would certainly have been lower.

It's going to be an interesting weekend. See ya on the other side, folks!