A Look At Some Press Releases

It's Sea Otter time in California and that mountain bike and road bike festival is in its 24th year now. The venue is host to a lot of industry showing off their latest wares. In the meantime, many introduce new products here as well. Some major press releases are out ahead of the festival now and here is a brief look at each.

Ibis Carbon Wheels: Ibis, the long time mountain bike purveyors, have now decided that they should also sell wheels. Not just any wheels either, but really wide, carbon rimmed jobs that have some crazy features. Too expensive, you say? Well, at MSRP $1299.00 a pair, they aren't cheapos, but that price is about a grand less than a lot of other carbon fiber wheels out there, or that have preceded this offering.

Ibis made figuring out what they are selling easy. They use a three digit model numbering system where the first digit tells you the wheel size, ("9" for 29"ers, "7" for 27.5"ers), and the second two digits are telling you the outer width of the rim in millimeters. (28 or 41) They also have a very unique rim bead with no hook. It's also very thick. For instance, the 41mm wide rims have an inner rim width of 35mm. Of course, they are tubeless ready.

Before you run out and buy a set of the 941's, think about this a minute: A big, 2.35" 29"er tire is going to approach 2.45" wide on that rim, and maybe your dually won't fit that wide a meat. I do see these as being great for 29+ sized tires though. Ibis claims the 941's only weigh 1770 grams for the pair, which is crazy light for that width. Interesting product because it combines extremism with a more reasonable cost of entry. In a show of true irony, you'll see a Surly Krampus shod with these before long!

In the "We better wait to see if this catches on" file,  Chris King finally offers an XX1 drive shell for its ISO hubs. I know.......this is stunning news. However; if you recall how long it took Chris King to come out with a bottom bracket after saying they were working on one, you'll realize that this XD drive shell addition to the line is actually a "quick market reaction". Look out, they may have a fat bike hub out before you know it! Now, I gotta say that I really like Chris King stuff. It's well made, and lasts a long time, plus it comes in great anodized colors, but c'mon! The product roll outs are so far off the back it is comical.

For years, the 29"er trail bike crowd has clamored for a  "36 Fox" for their longer travel bikes. They even went so far as to mod 26"er forks to work in that manner for them, but only a few were intrepid enough to risk the investment and life and limb to do so.

Well, now Fox has announced its 2015 line up and whaddya know! There is that sleek, black long travel, 36 Fox for 29"ers! The 150mm or 160mm travel options should satisfy the chunk riders with big wheels out there just fine.

My interest was piqued when I read that the axle can be converted from 15mm through axle to 20mm through axle. Really?!! Why didn't they do this from the get-go with the 15mm through axle stuff? You know......it makes too much sense, and I am glad to see it now, but it is surprising that they finally did the "right" thing now. Anybody need a 20mm through axle 29"er wheel? (I might happen to know where a set is! ) <====HA! 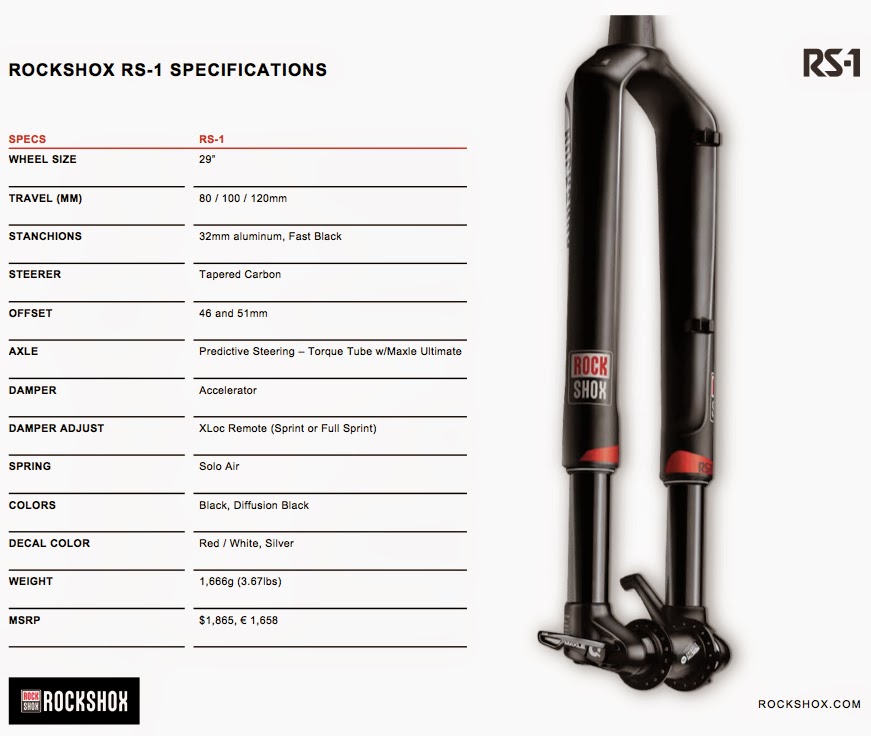 Upside Down With SRAM:

SRAM introduced a new fork which features a totally new direction for the company. Upside down forks are nothing new, but have been plagued with torsional flex issues.  All along the missing link, as it were, was the axle which had been limited to sizes too small and flexy to arrest the forces at work here.

To my way of thinking, SRAM did a great job of throwing out conventions to solve, (potentially), an issue that has plagued forks of this type for bicycles. If it works as well as initial reports indicate it does, this could mark a sea change in fork styles for any wheel size mountain bikes, or fat bikes. SRAM has kind of taken a bath on tech in recent months, what with the road hydraulic deal and Avid brake issues, however, this may change their fortunes. Well.....maybe not with this particular fork, but with the possibilities for wider front flange spacings, (this takes a 110 OLD hub), and with larger through axle sizes, (this has a 27mm through axle), SRAM has opened the door to looking at things in a different way, which I think is the really big news here.

Sure, it is stupid expensive, ($1800 bucks), and the proprietary, (for now), parts are only going to add to the expense, I feel that they are on to something here with regard to the axle over lock dimensions and through axle sizes, which I feel are forward thinking here, but perhaps not going quite far enough.

Stay tuned: More Sea Otter press releases will be appearing soon, and I may have a thing or three to say about it!
Posted by Guitar Ted at 1:30 AM