Word was being spread about a new trail some fellas had cut into Sherwood Park, an area of Waterloo that used to have some homes that have been removed since it is an area that floods quite often. (I wrote about this area last month as well, which you can see here.) I was on this a bit with my son about a week or so ago, but I didn't get to see all of it. So, the other day I took the long way back from work and checked it out.

I always find it interesting to see how someone else interprets a landscape into a trail. Sometimes things just don't make a lot of sense for many a reason. Sometimes things work out really, really well and exceed my expectations for an area. Around here, that doesn't happen too often, but it has happened. This trail isn't hampered by those who made it as much as it is and will be by where it was made. But that's par for the course when you build next to a river that goes out of its banks on average about once a year, sometimes to an extreme level.

For what it is, I found it fun. It is single track, and twisty-turny, as is the style around here. It goes over some busted up rock and cast away concrete in spots. It goes under a couple of precarious broken trees. Someday that will have to be dealt with. It goes right by a fine looking deer stand, which always kind of bothers me at this time of the year. Especially if someone may be intending to use it.

So, it isn't perfect, and I'm not sure it doesn't go into some privately held land, (the deer stand would be indicative of an area that is perhaps not public), but if you are local and want to check it out, you will see a couple of access points right off the South Riverside Trail where it comes off from the trail that goes over the bridge to Geo Wyth alongside HWY 218. 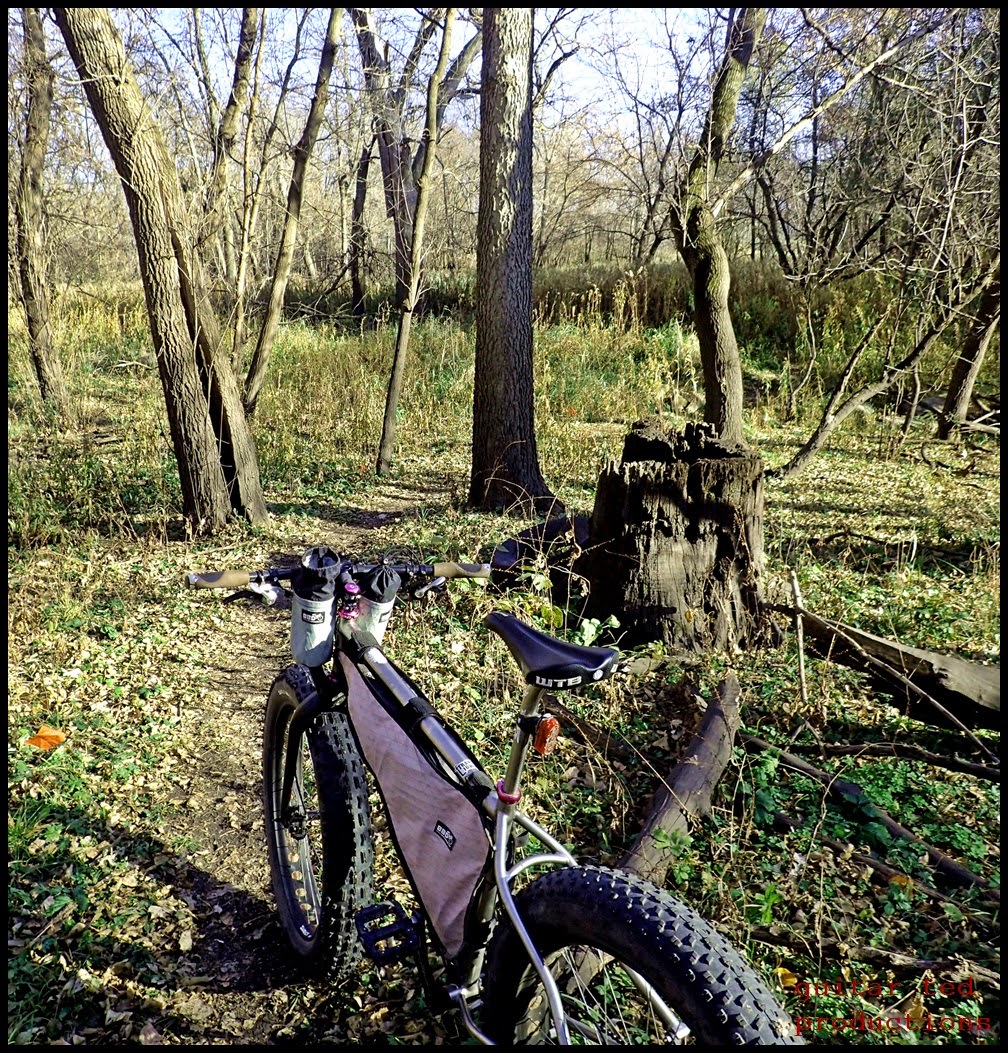 The trail is easy to pick out and it is flagged for most of its course. A lot of it runs right in lands I've often seen flooded in the Spring. So it will be interesting to see how long this lasts, since flotsam and jetsam from past flooding is everywhere down there. Another flood will rearrange that where ever it goes, which won't be off the trail as it sits, you can bet on that!

Yeah, I know..... I don't mean to be a "Debbie Downer", but I just don't see this lasting for a long time. Ya know, there is a reason they moved all those houses out of there in the first place. But, I figure I'll enjoy it as long as it does last and see what, if anything, gets destroyed next Spring or during Summer when the Cedar decides to come out of its banks once again, as it often does. Or whenever big winds blow and those wild trees throw down big branches or just fall over, as they often do around here. Of course, I could be all wrong about it and it may be that it will last a long time. You just never know when you have trails along a river like the Cedar. River bottom land is always in a constant state of flux.

Whatever happens will happen, but for now, there is a bit of new trail down along the Cedar River. I'll take it while I can get it......
Posted by Guitar Ted at 1:30 AM