My morning started rather early yesterday when I awoke at 5:11am to get up and kit out for an early morning ride before we had to leave as a family for Thanksgiving dinner at my parents place.

The snow we got was barely enough to cover the ground again after most of what we had melted in the previous day's heat. However; now it was down into the single digits and there was a slight Northerly in the air which had a tremendous bite to it this time. I had all my wool stuff down to launder since it has been worn several times and I was left with synthetic stuff. I layered as best I could, but let me tell ya.... Wool is where it is at folks. While I didn't get uncomfortably cold, I never was warm, and I was not going to stop for anything short of total mechanical failure (or a quick pic!), because lingering and "smelling the roses" on this ride would have left me freezing to death.

Of course, I rode the Blackborow. Low range this time. It was just fine too. I climbed the dike and I had to get out of the saddle, but the big ol' Lou tires clawed at the surface and never slipped out. All I had to do was to keep the pedals turning. I swapped out the stock grips for some Ergon GE1 grips, but I think I am going to swap out to the GP2's that I have because I really feel that the paddle shape and the stubby bar end are more conducive to Winter type riding than the GE1's are. I like the GE1's a lot, but those are for faster, more technical moves. Not so much for Winter slogging, long spins on the flats, and slower speed stuff. Other than that, everything has been great so far. 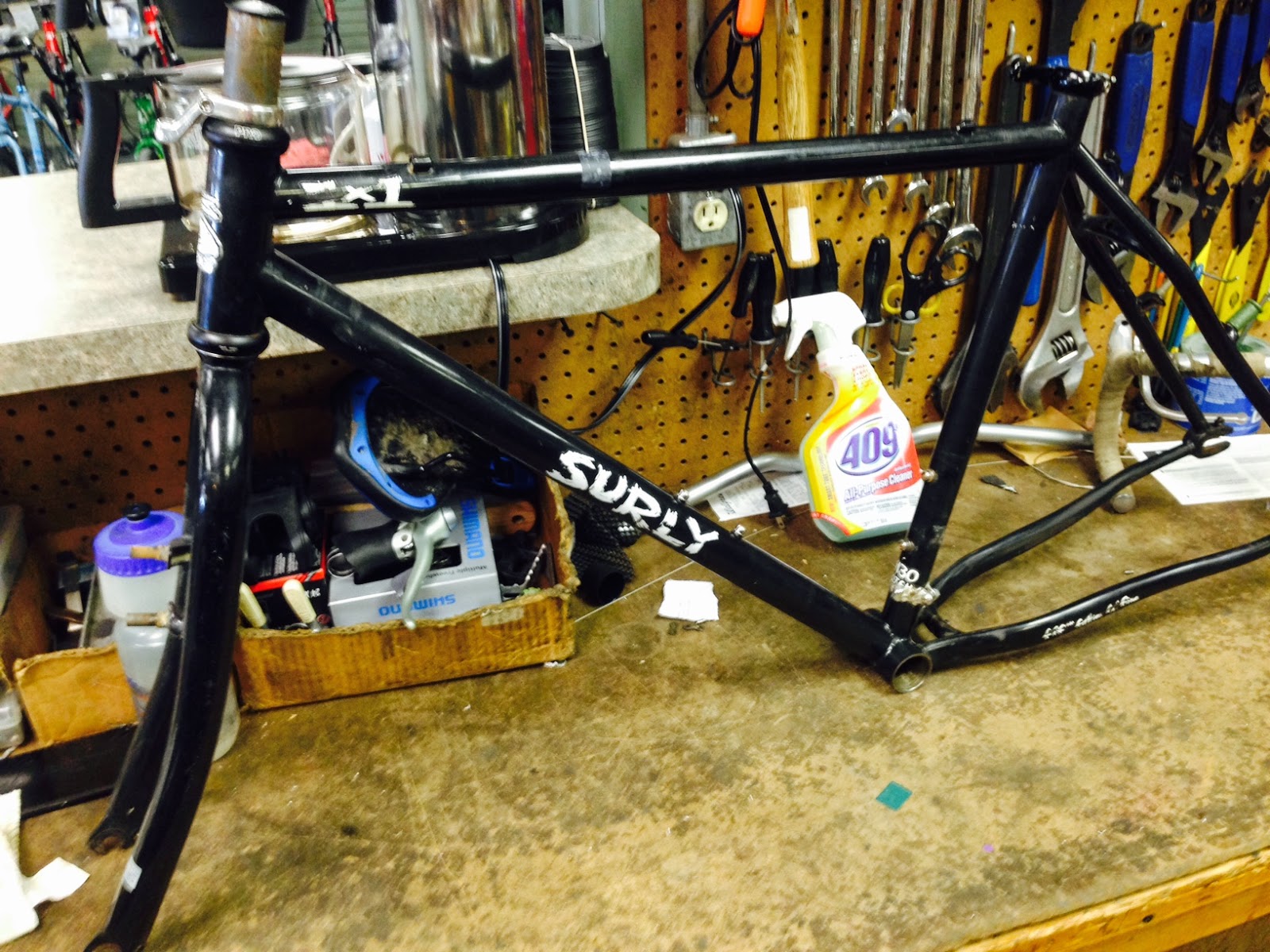 I have been tinkering with the "family bike", the shop tradition Surly 1X1 that I was bequeathed recently by its last owner, Brian. I'm kind of shooting for a classic "silver and black" look with the parts. So far I have an old silver Bontrager seat post, a chromed Mountain Goat "bull moose" bar/stem combo, and three out of four old Deore cantilever brakes have been dug up. I need to scrounge the Lab for the fourth and final piece of that puzzle!

Wheels are generously being donated to the cause by the Slender Fungus. (Thanks!) I traded for a set of old, silver, 110BCD LX square taper cranks, and that will be set up with a Surly stainless steel 38T ring and a 20T rear Surly cog that I have laying around. I'd rather go with a 16T, or maybe a 17T, but all I can find is the 20. Oh well.....

I still am thinking I will be putting on a sprung Brooks saddle on this, but I just picked up a black Ergon SM3 that I stuck on there. I think the Ergon would definitely work, but I like the idea of the sprung Brooks and will likely go for that at some point.

Next Saturday on Dcember 6th the Trans Iowa Clinic is happening at the Krunkwich Ramen House, (the first Tacopocalypse location, and the same place we were at last year), which is at 621 Des Moines Street in Des Moines, Iowa.

If you cannot access the Facebook event page I linked above, just leave a comment here that you will be attending and we'll make sure we have a chair for you to sit on. Here is a short list of what you can expect.

While the event is aimed at Trans Iowa rookies, anyone is invited to show up and we'll be glad to have you. The event is free of charge and all I need is confirmation that you will be coming so we can make chairs avialble for everyone to sit on. Please leave a comment here today so I can add you to the list.

That's it for today. Stay warm and get outside and burn off some of that turkey!
Posted by Guitar Ted at 1:30 AM

Mark, I think I have a 18T cog that you are welcome to. Will need to check when I get back home.

Oh really? That's too kind of you. I can trade something in a lower range if you ever want that.

Facebook link wouldn't work - I'll be at the clinic with a +1. Thanks!