NOTE: I was provided these samples of the Anything Cage HD by Salsa Cycles at no charge for review. I was not paid nor bribed for this post and all of the thoughts and comments are mine alone.

Salsa Cycles has been one of the only, (if not the only), company really pushing for riders to go beyond the "normal" limits of cycling. In that vein, they have not only made bicycles useful for these varied "out of the boundaries"  cycling pursuits, but they have tried their hand at various unusual ways to accessorize these bikes. One of those has been the "Anything Cage", which originally was meant to be mounted on the "Three Pack Bosses" of forks like those found on the Fargo, Mukluk, and now the Blackborow.

Background: Original Anything Cages were made from tubing and  had a reputation for being less than successful at staying in one piece for some folks. That was back in 2010. Since then Salsa Cycles has responded by introducing a redesigned Anything Cage which became available earlier this year. However; unbeknownst to us, they were working on a new design. A heavy duty version of the Anything Cage which has become public knowledge only just today. Dubbed the "Anything Cage HD", it is obviously quite different and I was forwarded a couple samples to try out about two weeks ago.

Technical Info: The Anything Cage HD is made from injection molded impact resistant nylon. It features a new shape but still does the old job of carrying your roundish shaped objects like water bottles, Nalgene jars, dry sacks, or what have you. Basically anything that will sit well on the cage and weighs 6.6lbs or less. The new Anything Cage HD still mounts to the Three Pack Bosses found on many Salsa Cycles forks or down tubes. Each cage comes with longer bolts, three washers, and two Salsa Cycles webbing straps to lash cargo to the Anything Cage HD. Each Anything Cage HD will cost $35.00USD and the two samples sent to me weighed in on the scale at 160 grams with hardware. For comparison, the original Anything Cage, which I own, weighs 100 grams.

In Use: The mounting of the Anything Cage HD is straight forward if you own a Salsa Cycles product with the Three Pack Bosses. I followed the simple instructions and they went on easily. Now to mount up some suitable dummy loads and ride! I chose a Topeak By-Camper tent, which is a heavy-ish one man tent that comes in its own dry bag, and an Outdoor Research dry bag stuffed with various items such as extra warm clothing, tubes, an air pump, and on occasion, a flask with coffee and extra water bottles. The loads in the dry bag varied, but the tent stayed on during the entire review period. NOTE: It is important to lace the webbing straps as Salsa indicates in the instructions for the Anything Cage HD for proper load bearing and cinching up of those straps. 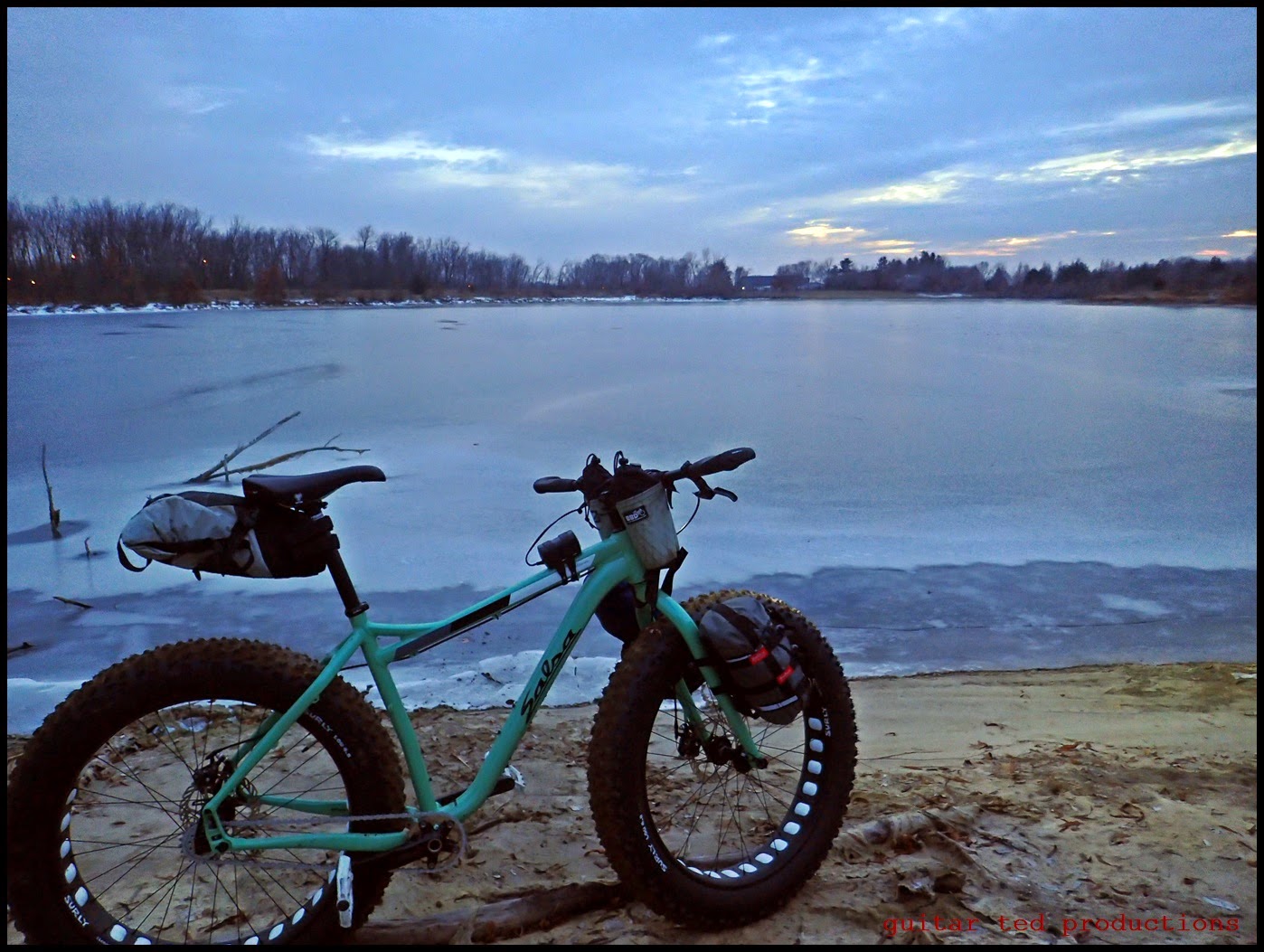 I used the Blackborow DS with two Anything Cage HD's on rides that varied from commutes to work to single track to some bushwhacking and beach rides. I cannot go on with this review without making mention of how well the Blackborow DS rides with two loaded Anything Cage HD's on board. That was a nice surprise. You'd almost think those wily Salsa engineers thought of that ahead of time, eh? (<==HA!)

Anyway, the dry bag side was unloaded almost everyday for the two week review period to reflect how one might use this in a bikepacking set up. I changed the load occasionally as well. As Salsa Cycles indicates, using "roundish" objects will work best, and my tent was a testament to that, never getting loose or hardly shifting around in the Anything Cage HD at all. The other side featured those "not so roundish" loads, and with a bit of care and a touch of extra attention, even those stayed put. I had to wrench on the straps pretty severely, but the Anything Cage HD stood up to the task and I felt that these racks performed flawlessly at carrying loads. 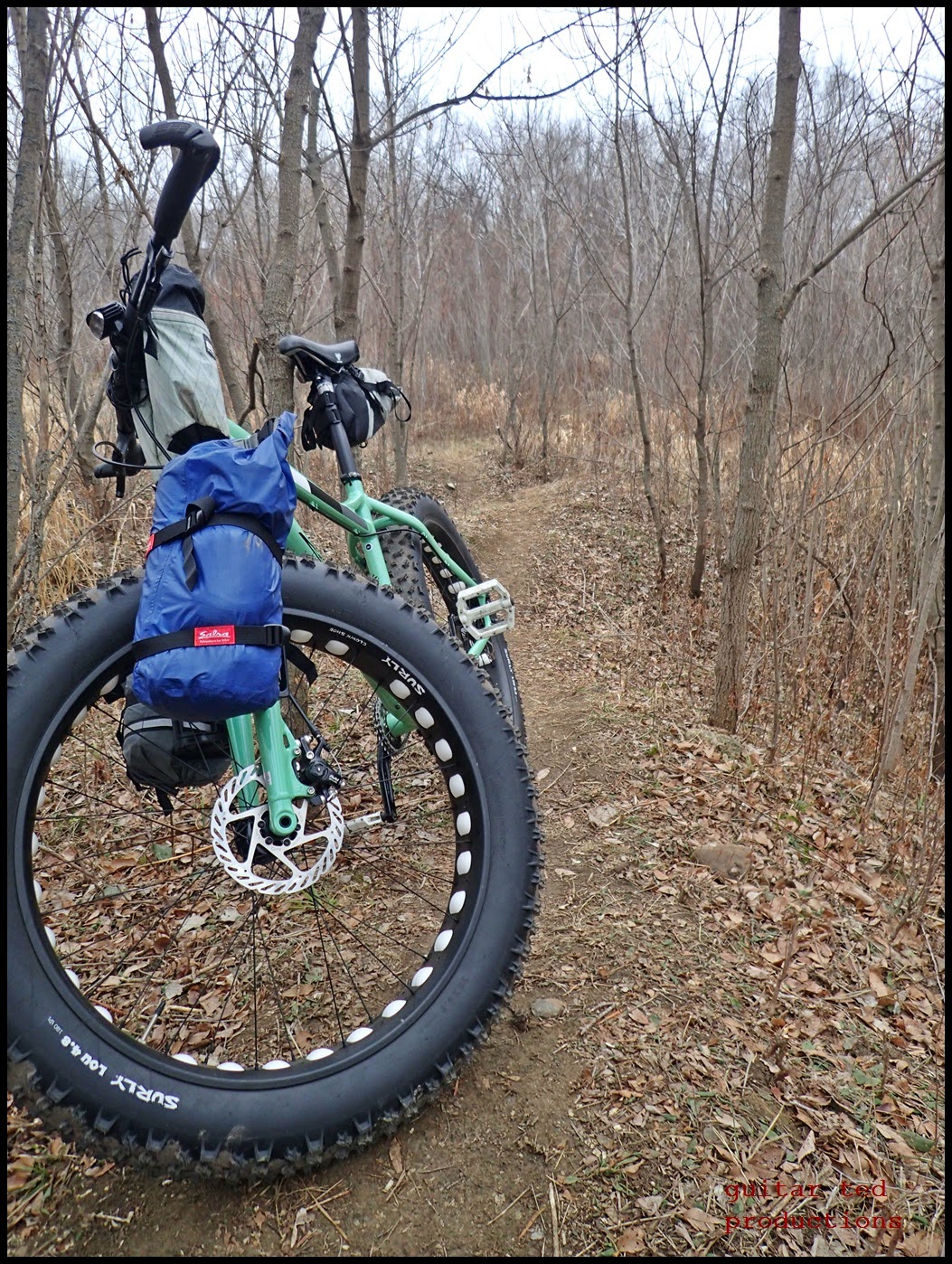 With the Anything Cage's past in mind, I tried everything I could, within reason, to put the loaded racks to the test. This included ramming curbs at speed, bounding through rough, frozen, tussocky grass, riding frozen dirt churned up by heavy construction equipment, and doing the whoop-de-doos on local single track to put all sorts of forces into these cages. Nothing shook them loose, nor did they break or show any signs of doing so. I think these "Heavy Duty" cages have earned the moniker and that they should do well in the long run.

Verdict: With a solid two weeks of bouncing around fully loaded and using several various loads on the one side, I have to say that these cages are the real deal so far. They are easy to use and make any Salsa Cycles rig with the Three Pack Bosses into a mule capable of hauling around more than you could without them.

On a negative note, I will only say that they are an unlovely beast of a component. Unloaded on the bike, they look like some sort of freakish radar/ microwave receptors. It is a sure bet that the new Anything Cage HD will not win any beauty contests. Well, that is unless you decide to rely on them to pack your tent and sleep system on some long outing. Then they may be the most beautiful things you've ever seen. It's all in the eye of the beholder, as they say. Of course, you can still buy the Anything Cage in its tube constructed version if the HD is just too much for you to handle visually.

The Anything Cage HD is a worthy compliment to any Salsa fork or down tube where you may want to pack on some cargo. This rack certainly fits into the "Adventure by Bike" ethos and the new design should provide many miles of faithful service to those who decide to employ it. The ease of use and versatility make the Anything Cage HD something you could use for touring or everyday use. I'll be looking for more ways to use these in the future and I'll be back with a long term use update later on.

As noted above, these Anything Cage HD's came from Salsa Cycles at no charge and I will strive to use my honest thoughts and opinions about these products here and in the future.
Posted by Guitar Ted at 11:00 AM

Hmm... plastic cages? Only ones I ever had snapped easily below zero centigrade. Now these may be a different plastic...

@Ἀντισθένης: Yes, probably different. I know my experiences with Velocity's Bottle Traps at below zero Fahrenheit temps has been really good, and they are an injection molded plastic.

Of course, t hasn't been that cold here yet, but many of the days during this review it was below zero Centigrade, just for reference.

Mark - How much did they deflect when resting the bike against the ground or against an object? I noticed that my current Gen 1 cages can take a lot of weight when the bike is leaning against a tree or the ground.

My bike slipping after leaning against something is how one of my Gen 1 cages broke. I will probably pick at least one or two of these up because the strap mounting options are better.

@Steve Fuller: They bend pretty well when you lean in on them. I don't mean to say they bend a lot. They definitely have give though, and I had to lean into them hard enough I may have bent a typical tube water bottle cage, as far as force goes. Hopefully that gives you an idea.

I think they would easily survive a tip over with or without gear attached, for instance. That said, anything can and will break given the right circumstances.