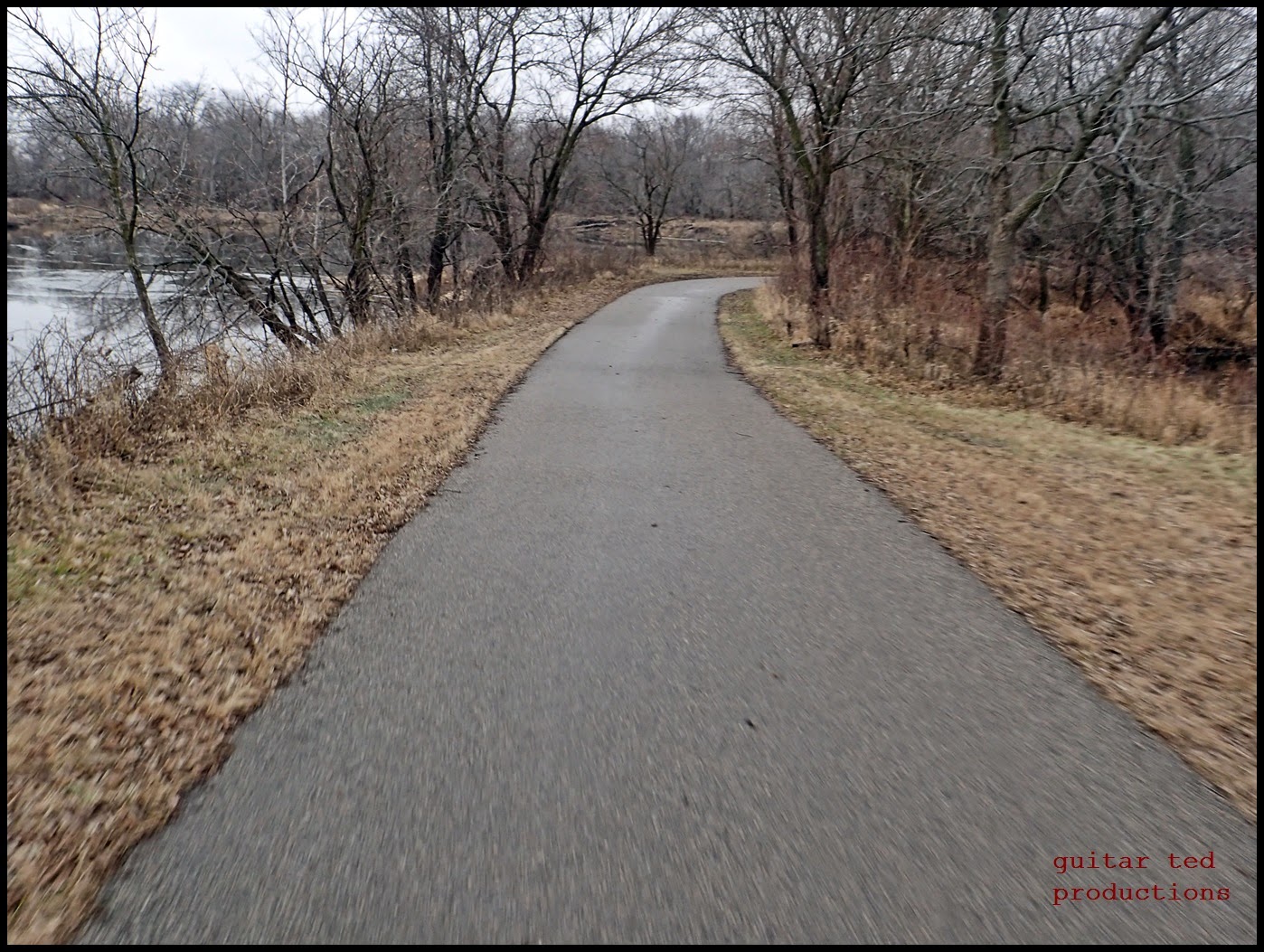 Sunday I left to the Northwest on a multi-terrain beginning to a gravel ride. The trails on the way over saw me run across grass, dirt, chip seal, double track, and busted up pavement. Then I hit the bike trails to get out of town to the North and the old 3GR course beginnings. My intentions were to ride that entire course.

I ran across my old neighbor on the Big Woods bike path, which was nice. We chatted a bit then I rolled onward. It was almost the same temperature and humidity as last week when I about burnt up with overheating, but this time it was strangely fine. I did ride with my jacket unzipped a bit. Otherwise it was windy from the South/Southwest and I was getting pushed along well by it. I decided I needed to get worked coming back, which is the old Jeff Kerkove way to do a ride.

I got out there and saw that the light was not good already. Looking at the clock on the computer I ascertained that I would run out of light long before I got around the old 3GR course. Hmm......a modified route was in order then. I went straight on Mount Vernon road until I reached Sage Road. That was a long stretch into a quartering headwind, but there wasn't enough time and I probably need the harder work.

Once again the gravel wasn't really wet. It was "damp", and the wind and humidity were not letting up, so I have to assume that the roads are soaking a lot of this up now, which would indicate that they are not frozen anymore either. Either way, it wasn't very messy at all, which was fine with me. Once again, the vapors would form if I turned my head, and everything facing forward was dripping wet. It seems odd to have this cool, moisture rich atmosphere this time of the year. This is very "late Fall-ish", not at all what I would expect for a date so close to Christmas. Oh yeah.......it happened to be the Solstice. I didn't feel anything magical or different in that regard. Just a "day".

The legs felt a lot better this time, which was a good thing, even after a ride the day before. But that isn't to say that I was flying. I wasn't, but I was able to hold a steady tempo and I didn't bog down on the climbs.

By the time I turned down Sage Road I was seriously running low on light. I figured out that I shouldn't spend a lot of time at the big rock of Big Rock Road, but I had to stop for just a short visit! Unzipped the coats and let some heat out. Everything was damp, but I was comfortable in my two under layers of wool clothing.

I snarfed down an Apple Cinnamon Hammer Gel packet here. Man......it's like liquid apple pie! That was tasty. Some water to wash it all down, a couple of images snapped, zip up and take off. Oddly enough, where I turned onto Sage Road and here at the big rock were the only two places I ran into soft, wet gravel.

Now it was a race to see how soon I could get back into town before it got completely dark. I had a tail light on, but I had no head lamp. Once I reached Waterloo, the street lights would be my guide, but I didn't want to get stuck out here in the rolling hills without some light. There would be no moon, and the grey, dun atmosphere would make discerning features harder in the dark. I pedaled onward at a pretty decent clip now. My good fortune was that I reached town at the last possible moment and the street lights were all ablaze in the town so I could easily find my way back home.

It was a good ride, and I got two plus hours in. Better than sitting on the couch and another bonus gravel day at the end of 2014! I'll take it.
Posted by Guitar Ted at 1:30 AM

That sounds like a great ride! Rides this time of year are such a bonus. Fights the ill effects of all the gloom and no sun! Merry X-mas!

I don't "love" many gels, but the apple cinnamon one is the exception to that.