The Touring Series: A Ride In Jo's Truck

Thanks for joining me again on another adventure in "The Touring Series". This tour was dubbed the "Race Against Death Tour". This tour occurred in August of 1995. The three participants, Ryan, Troy, and your's truly, left from Cedar Falls, Iowa to try and get to Winter Park, Colorado in two weeks. Here I am reproducing the tale as it was posted on the blog in 2009. I also will add new remarks and memories where appropriate at the end of each post.

Once again, there were no cell phones, internet, social media platforms, or digital cameras in use by we tourers in 1995. I will post images where I can, but this tour wasn't well documented in images, so there probably will be very few sprinkled throughout. A modern image will be used only where it depicts things I want to clarify, like where we were in that part of the tour via a map image, or the like.

The "Touring Series" will appear every Sunday until it ends. Look for past entries by scrolling back to a previous Sunday's post, or type in "Touring Series" in the search box to find more.

With our plans up in the air, and the day wasting away, we weren't too comfortable with just waiting it out to see what would happen. We fidgeted, we paced, and basically clock watched for 12:00 noon to happen. The convenience store clerk we'd met earlier, named Jo, had to assess our rigs. Only then we would learn whether we were in for some much needed assistance, or chasing smoke.

When noon arrived, we still had about a ten minute wait on our hands since Jo had to close out her register, talk to the next employee on shift, and get out of her work garb. After what seemed like an eternity, she walked out, asked to see our rigs, and we went outside. Well, as it turned out, our fears were all for naught. Jo had a truck! Not just any old pick'em up truck, mind you, but an honest ranchers truck. A three quarter ton Ford 4X4 with a crew cab and a full box. Yeah......our bikes fit fine. It was another thing to lift them six feet into the bed of that rig though!

So with that done, and our minds at ease, we piled into the cab, settled in, and Jo took us on an incredible 20 mile ride through the Niobrara River back country. It was really cool, and Jo filled us with a ton of information about the area, the struggles the ranchers were having with the Feds, and how we were lucky that we met her since this was the only road around the construction. It was lucky! These roads were crushed rock, steep, and finding our way without a detailed map would have been really hard. Jo basically saved us from losing at least a day on this tour. Not to mention the rest our tired bodies got riding in an air conditioned truck!

Well, we finally came to the end of that ride at the highway west of Niobrara. Jo pointed us in the right direction as we unloaded our rigs slowly and carefully. We were super grateful, and a little bit sad to have to part ways. Jo was an incredibly gracious help, and we wouldn't soon forget her and her big truck. But that's the way it goes sometimes. You meet for just a little bit, and life sweeps you down the road again, far away. 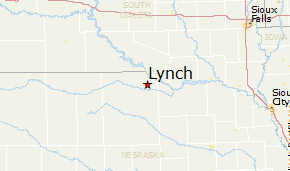 So we turned our faces westward. It was hilly, hot, and we had a long way to go before we got anywhere we could find a proper overnight. Troy wanted to get out of Nebraska, and we all did, really. But that would be a big effort on our route. It was time to go to work.

Our maps showed us we weren't far from a town called Verdel, but there wasn't much of anything there, and the next town was much the same. Finally we pulled into a town that had a convenience store that was called Lynch. We sat for a bit, got the tent out to dry in the southwesterly wind, and tried to cool off from the intense heat of the day. We sat for about a half an hour, then we saddled back up and headed westwards again. The road bent northwards a hair, then we joined another highway. About this time, we started seeing riders headed to Sturgis for the annual motorcycle rally. Things were getting a bit more interesting after a long afternoon of dreary heat and brutal hills.

The ride was a tour saver! Jo was a gracious host to us and as I say in the piece above, she was very informative. The struggles of the ranchers versus the government were sad to hear about. Sometimes I wonder what ever became of all of that......

Jo didn't forget about us either, I remember getting a post card from her after the tour was over. I sent her a thank you card as well. It was just one of those really cool chance meetings that you can experience sometimes on a bicycle tour. I've heard about others having similar experiences. It certainly gives you hope for humanity, that's for sure.

With Jo's gift to us now over, it was as if we were coming out of a dream. I remember when she left we were suddenly struck by the loneliness, the feeling of being nowhere near anything we were familiar with. Thoughts of the road ahead were now on our mind and the "unknown" road was intimidating. For a minute or two. Then the exertion of stiff muscles and the attention we had to pay to our situation quickly took our minds off those anxious thoughts. Back to work and the effort to escape Nebraska!

Next week: Highway To Hell
Posted by Guitar Ted at 1:30 AM