A Pedal For Karen Reynolds

I work with a guy and he found out earlier this year his wife had been diagnosed with cancer. This past weekend he hosted a fundraising ride for her and I attended. The reasons for the ride sucked, and they didn't. I was happy that there was a common cause which brought us all together, but I am not happy about the reason for it. Ya know?

The day was cool to start out with, but forecast rain earlier in the week for Saturday never came to fruition, and as a bonus, the wind was a mere breath. Well, if there was a wind at all. An amazing Fall day to ride. Just outstanding. Again, I was so glad there was a reason to get up early and get over to Cedar Falls to start the ride. When I reached the meeting place, it seemed that the turnout was light, but I guess people that ride bicycles are people who run late , or something, because by the time we actually got rolling there were a lot of folks there. A half an hour late, but we got rolling........

This would be one of your "mixed terrain" rides, I guess. There was a lot of pavement to start out with. But that was owed mostly to the chosen start area, which was picked to coordinate the start between the short bike trail ride, the long bike trail ride, and our gravel ride. Since the ride host deferred to the pavement riders, we had to hoof it several miles before we were out on gravel.

The pace was brisk, owing to the "roadies" in the group. Joey, a coworker of mine, being one of the instigators. We had to snake our way through down town Cedar Falls, go through a farmer's market, and negotiate busy Center Street before we got off on Lone Tree Road, and lighter traffic. Not until we were headed North on Ford Road did we finally get to gravel, and this was a good mile- maybe two- out of town. I thought maybe the pace would come down once we hit gravel, but not on this day! The gravel was about as smooth and perfect as you could ever hope with a good, solid base. Better than pavement!

I was riding up front trying to keep the pace at a manageable level for myself. Let the others drift back and start yakking with each other! I may not be a roadie, but I do know a couple of their tricks. This worked, until Joey decided to draft off a passing car. Dang it! Keith, the ride host, took off after him, and I was hoping I wouldn't be left behind at this point, but no one else gave chase, so I kept to my cadence and watched to see how far up the road they were going to pursue this mad game.

Fortunately, Keith and Joey sat up and eventually drifted back to us. Then we finished out the Ford Road section which dumps riders out on County C-57. We were obliged to take about three more miles of pavement before we got to turn South and, finally, back on gravel.

This section was hilly as we had to cross the Cedar River just downstream from its confluence with the Shell Rock River. It was paved too, so I had to work a bit harder seeing as I was running the 650B Sendero tires, which are essentially mini-mountain bike tires. They definitely made me work more. Anyway, more about the tires some other time.

Getting back to the gravel was a good thing, but it was so fine, fast, and packed in it may as well have been pavement too. A complete opposite of my ride the previous Wednesday. I ran into so much fresh gravel that day I was glad to have the advantage of the wider tires. However; I wasn't gaining anything on the other riders since everyone was crushing the road because it was super smooth. I stayed up front and just worked as hard as I needed to. Having not really ever gotten my feet back under me since Gravel Worlds, I was not riding as easily as those who were with me who were in better shape than I. But at least I was able to keep up pretty well.

We did have to stop a few times to gather up those riders getting strung off the back. So there were regular breaks. But we were never going slow up front, really. It wasn't my ride so I didn't feel it was up to me to say one way or the other, but I thought we could have slowed it down some just in an effort to keep the group together more. I can't imagine how it would have gone had it been windy. That would have been quite a mess! Thankfully, it wasn't windy until toward the very end, and then it was only enough to make the flags flutter.
Joe, my co-worker, and I were chatting and we were wondering why we hadn't seen any harvesters out. We were seeing plenty of standing corn and we knew farmers were anxious to get crops out. Well, as we made our way South more we started seeing them. Then we started seeing the big semi-tractor trailers they use to haul the grain away too. Then traffic got busy in an area where a lot of corn harvesting was going on. It was a bit touch and go, but we all made it through the dust!

We went by a farm that had a bunch of Halloween decorations out front and Keith decided he needed to get an image of what was there. After this I didn't see Keith again, except when we stopped to gather up riders just after passing Zion Lutheran Church. Then I didn't see him again at all until much later on. The route we took went East at one point where T.I.v12 had come out of Hudson, Iowa. I knew the area well enough that myself and about four others were motoring along, waiting to get into Hudson. 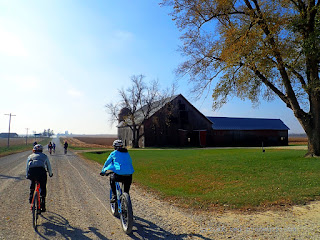 Once in town we waited for stragglers, but I only saw two riders across the highway, then they disappeared! We waited a loooong time, but finally one of our group needed to hit the restroom, so we moved on to the local Casey's, wondering what happened to the rest, and wondering what our next move would be.

While we were waiting, Keith texted me and said they had hit the pavement since one of the riders with him had enough of gravel for the day. We took off down the bike trail and as we approached the turn off for the trail that headed off to Cedar Falls, I could see cyclists standing. It turned out that it was not only the rest of our gravel group, but part of one of the paved trail groups.

Just as we rolled up, Kathleen pinch flatted and so we stayed there as she and another rider got that fixed. Then it came time for everyone to get going again, and I took my leave since I had to get home, eat, get cleaned up, and ferry my daughter over to her job. I ended up logging 45 miles. It was a great ride and I had a good time.

It seemed like most folks had a good time as well, so all in all it was a top notch day for late October when you just never know how nice a day you'll actually get. Thanks for the opportunity to ride, Keith!
Posted by Guitar Ted at 1:30 AM