The State Bicycle Co, formerly all about fixed gear rigs, has heavily dipped their toes into the gravel bike scene and actually have done fairly well for themselves. I tested a steel single speed gravel bike from them a few years ago. Anyway, they unveiled a new aluminum rig, a "Black Label" All-Road in 6061 AL.

This is a fairly decent looking rig, and comes with a carbon fork, so it probably is reasonably lightweight. It's got some nice options. One is to get two complete wheel sets- one 650B and one 700c with identical rotors and cassettes for seamless swapping, for an upgrade price. The other is the optional "Monster Fork, which is basically just the same fork with 3 Pack bosses on the fork legs. That upgrade is 139 bucks.

Comments: Aluminum and "nice ride comfort" often don't mix. Add in a stiff carbon fork and you know what happens next. Maybe we'll be wrong here. Hope so..... Get the Monster Fork. Why? If you plan on any longer rides, you'll want more water. Check the bottle boss count on the regular offering. Yeah...... that ain't gonna cut it. For $139.00 you'll double the water bottle capacity, and you will be thankful that you did.

I'm a big fan of a good bag. I have often used handle bar bags but found them to be kludges, at best, and awful experiences at worst. The idea of such a thing is great, but the execution has been wanting. I ended up going the front rack mount/racktop bag route on my Black Mountain Cycles "Orange Crush" rig and have thoroughly enjoyed that set up. However, not every bike can, or should, have that set up.

That could be rectified with a decently designed handle bar bag, and this bag from Route Werks looks like it has a lot of promise. For one thing, it seems to be solidly attached, and for another, it integrates with current technology desires and accessory attachments. I'm intrigued by this thing. It doesn't look so big that you'll be tempted to put a lot of weight in it, which I think is wise. A lot of weight up high near the steering axis is a recipe for poor handling, so I don't like big bar bags for that reason. Keep it small, light loads, and easily accessible while riding. Route Werks seems to have it figured out.

Maybe, if they do, this will spur on some spirited designs from competitors, because the handle bar bag game has been stuck in the 1940's for waaaay too long. I may be looking at one of these bags closer. Stay tuned...... 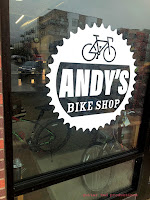 Another Solo Stint At Andy's:

Yesterday I completed another solo stint at Andy's Bike Shop since Andy and his immediate family went to a wedding in Florida. It wasn't as intense as the last solo stint I held down in early August because, well- it's mid-October. Bike shops are not nearly as busy now. So, I wasn't worried about being overwhelmed, I was more concerned about being bored to tears. Fortunately I was busy. This is a good sign, so I was pretty happy about that.

But the seasons are changing and I know exactly what that entails. Less work to do less often. I should be getting more time at home in the near future, and that means time for some projects. I have several things in mind to get going on. Some are not at all bicycle related. Many are. I'll be yakking about all of that in the weeks and months to come.

Meanwhile I am hoping we can get caught back up on stock for inventory that has been hard to get over the course of 2020. Things that are seemingly mundane, everyday bike shop things have become scarcer than hen's teeth. What a weird year! 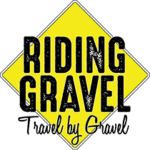 Thursday the newest Riding Gravel Radio Ranch came out with a special guest, Dangerous Dan. He is the RD of the Sterile Iowan gravel event. Locals will recognize that name and event as being one of the first to occur in 2020 after "the rona" hit, as Dangerous Dan likes to say.

It's a good listen, if I do say so myself, and a good look at what it takes to put on an event in these times. It showcases how smaller events can manage this plague better than big, fancy, "real races" like the Giro, which is on the verge of being shut down this weekend in Italy. Or compare this to gravel events like the SBT-GRVL, "that unnamed event in Kansas", or the others like it that had to be cancelled in 2020.

We're going to have another podcast episode pop out here any day now and a new one gets recorded today, so catch up on the latest at that link above. As always, you can find the RGRR on your favorite podcast provider.

That's a wrap for this week. Have a great weekend and get out and ride!

The scammers have gotten hold of the Route Werks bag info and are pushing out tons of fake ads for it at $30. At $30 I would be all over this thing. Maybe even at $60. At $130? Not so much.
I want it - make no mistake. I'm just not going to pay three figure prices for the thing, no matter how good it is.
It should be a great long ride bag.