Updating Thoughts For The Fargo Gen 1 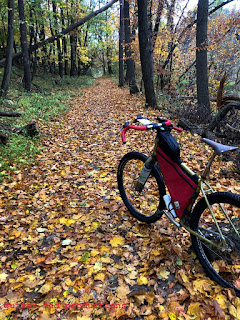 The excitement factor for the Fargo Gen 1 bike gets re-stoked from time to time, and I just never know where that stoke is coming from. This time a swap of tires has me wanting to make upgrades to the old bike.

The 9 speed drive train that is currently on there is getting pretty tired. I've already stated that I wanted to swap back in the original XT crank set, (which I barely used, by the way), and a new chain and cassette, of course, would have to be put on as well. That also would include the green anodized Chris King bottom bracket I've had laying around for ever too.

I swapped in a Brooks saddle, a C-17, which so far has been great in combination with the titanium Regulator seat post. So, that bit is relatively recent in terms of upgrades. I could see going with a high end WTB Volt saddle at some point though. The combination of 'give' that the Brooks has in conjunction with the seat post is really nice, so maybe not.

My biggest beef as of now is with the brakes. I've fiddled and tweaked on the brakes for this bike for years. I think it is high time for a hybrid cable/hydraulic set up on here. I may just be getting something along those lines to solve my braking issues. I could migrate over my fully hydraulic set up on the Raleigh, but the length of the lines is maybe not right and well......that's messing with a good set up. I just do not wish to get that bike screwed up by taking off what works so well over there.

Anyway, the biggest upgrade, and one I have been talking about as well, is the wheels. I think I need to go to a carbon rim with some really nice quick release hubs and build a set this Winter for this bike. That would go a long way toward making these Extraterrestrial tires worth the extra weight. So that would, obviously, be really expensive. So, while that would likely make far more difference than anything else on the table here, it may be the most difficult to pull off due to the expense.

I can also see going for a carbon handle bar here also. If I did, it would be like the Whiskey bar I have on the pink MCD or a carbon Cowchipper, unless I can find something in carbon closer to the Luxy Bar. Like that would ever happen!

For hubs, have you considered going to 9/10mm through axles? While the dropouts are obviously still slots not holes, I have found the rotor location accuracy is improved relative to traditional QR hubs. Only issue seems to be limited availability of skewers - I'm aware of only DT Swiss ones since American Classic disappeared.

I have the TRP Hy-RD calipers on my Gen 1. I'm still getting them dialed in, but I've been generally happy with them so far. I'm also perfectly happy with BB7 when other people are not, so YMMV.

@Exhausted_Auk - I have not considered those, and you may be right. That may help. It’s been my opinion that the concave and convex washers Avid employed on those BB7 brakes were the real issue there though.