So, this happened the other day. Andy of Andy's Bike Shop ordered in some beanies, took his iron on logo patches, and voila'! Beanies for your warm headed goodness.

These aren't even up on Andy's site yet, but if you call down to the shop, we can set one aside for you. They are a very warm, fleece style beanie. Not as deep as a Euro styled one, but more like a skull-cap fit, if your head is big, like mine is.

Anyway, I think Andy said these are like $12.95 or something.......don't hold me to that, but that's very close if it isn't right. I know! Just tell Andy you saw it here and it is a twelve-ninety-fiver. Special "G-Ted Productions" price! Ha!

We also have t-shirts and stickers and maybe some of those same iron-on patches you see here on the beanie. Just stop by, call, and ask. We're hoping to get some Riding Gravel stickers and whatnot down there at the shop sometime soon also. Stay tuned...... 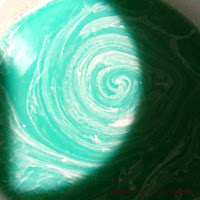 Sometimes I chuckle to myself when I am down in "The Lab" mixing up sealant using "MG's Secret Sauce" recipe. I feel like some mad scientist, mixing up some formula that ends up getting out of hand and causing some catastrophic 'blob' to come to life that swallows life as we know it on this planet.

But that's probably just shreds of memories left over from seeing "Creature Feature" with my late Uncle Joe when I was young and impressionable. I'm not really doing anything diabolical, just doing something practical.

You see, I go through a lot of sealant for tubeless bicycle tires. My brother down in Lincoln, MG, told me about his special home brewed recipe for sealant that he came up with after years of toying around with stuff and it worked well. He shared this with me back in 2007 or so, and ever since then I've been doing sealant using this method. It's got good qualities, but the big thing from my standpoint is that it is cheaper than branded offerings you can get on the open market.

So, it's the best of both worlds for me. Cheap, easy to make, easy access, and effective in use. I know there are some of you out there that will want to know what it is exactly. I've shared it here on the blog before, search for it. I'm not taking the time to reveal the recipe again. Besides, it's called "MG's Secret Sauce" for a reason. 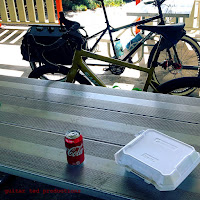 Last Wednesday I had lunch with N.Y. Roll from a local Bosnian food truck. But that wasn't why I am bringing this up. We had a wide ranging conversation covering many subjects, but the point I wanted to bring up has to do with the C.O.G. 100.

We have not made any definitive decisions, but all outcomes are on the table now. We may cancel the event entirely, offer refunds, or we may do a socially distanced type of deal, or we may do something else altogether.

One big issue is that we won't have insurance due to the COVID postponement after February 28th, 2021. So, if we were to run the event, we'd have to foot an insurance bill out of pocket. That makes offering refunds a bit more appealing, but as of now, we don't know what that might look like. So, there you are. I'm not making any decisions just yet, but you can see that in financial terms, this doesn't make sense to have the event.

And in any scenario, we're looking at probably losing money on this. But it is what it is. This situation would have been 100% different had our event not been scheduled right when the whole COVID thing broke. You'll remember that at mid-March we were being told that this virus was going to pretty much end the world. Had we been scheduled in Summer, we would have had a lot more information and, although the event would have been postponed- probably- we would have had more leeway with insurance.

Thursday we had a special guest in for the recording of the next "Riding Gravel Radio Ranch" podcast. His name is "Dangerous Dan" and his event is the Sterile Iowan. This wide ranging interview went on for over an hour, so this will be our longest podcast to date.

It was fun and I learned a lot from Dan while we were chatting. I won't give away too much, but this has somewhat to do with the above C.O.G100 discussion. Dan, having the luxury of a couple of months perspective, had a view that we didn't have. He was able to put on his event in a way that was safe and took in the protocols necessary to appease locals and government officials in his area. He also, along with other event promoters, found a way to bring some small amount of joy to some folks who have been locked up due to this pandemic for several months earlier this year.

There was a lot more, as I said, so make sure you look for this episode, which I think is going to be #61, coming out soon.

That's a wrap for this edition of Randomonium.

The thing I see currently with more and more supposed "small" events, people being irresponsible. I am referring to participants showing up from hot spots despite the event putting out the responsible CDC information on travel. Folks crossing state or county lines with what to me seems like "well, I do not have it. who cares" Yet they could be carrying it in from their own neck of the woods. This is my view based on happenings here in New England. You have folks who are coming from counties with increasing cases to counties with little. Then days later that county is hit. A good example is the recent listed Analog Gorey Hollows event. It was listed not long ago. They have done well in stating the obvious concerns. Yet, take a look at the roster on where folks are coming from and number cut off. A what is really a $50 weekend to start, may end in costing more. Asking folks to be repsonsible is just as witty as a face mask sign.