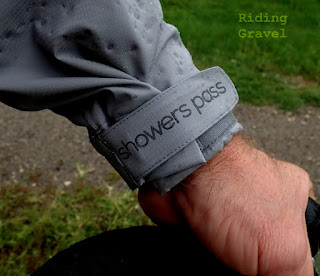 The news cycle has kicked back into high gear again. Today I have a few newsy bits to share. First up is the new review on the just announced Showers Pass Elements Jacket which went live yesterday. I got this jacket back in August when it was 90° every day and it wasn't raining. So, I had to really pay attention when it did rain and try to get out in it to test the thing.

This made it kind of tough on the ol' review since wearing almost anything against rain here in Summer is a fifty/fifty situation wherein you are warding off rain but perspiring so much due to the heat and effort of riding that you get wet anyway. Kind of defeats the point. Kind of like when we say "Six of one, half a dozen of another". You pick yer poison and end up wet no matter. So, they say there are real "breathable" rain jackets out there, but yeah..... I'm guessing these jackets are not tested in Iowa, or Houston, Texas, or anywhere it is humid when it rains. Rain jackets are good when it is cold and raining, and that is about it. So, any rain jacket is up against that here. The Showers Pass one at least feel good against the skin and is made of a light enough fabric that it seems nicer to wear than other rain jackets I've tried.

The Showers Pass folks wanted this to be packable, and it is to an extent. For this reason they left off pit zips. That is a mistake in my estimation. It makes for a really sweaty arm area since it is almost impossible to vent your arms without pit zips. Oh well, you give up that for pack-ability. They (Showers Pass) also said pit zips are almost never waterproof. Hmm...... I will have to defer to their superior knowledge of rain gear there.

But it is a nice jacket. Go read the review. (NOTE- Showers Pass sent this jacket for test/review at Riding Gravel. I was not paid, nor bribed, for this mention.)

Electrified gravel rigs are a thing. Not a big thing, like eMTB is, but they are out there roaming around the countryside now. Niner Bikes bit on the HPC trend and introduced a new electrified gravel rig with a Bosch motor. It's an interesting bike when you look at the details.

First of all, it is boost spaced in the rear. This bike is also flat bar compatible, and suspension corrected for a "gravel suspension fork". Ever heard of trekking bikes? It'd take Niner about three spec changes to swap this over to a flat bar trekking bike ready for European sales. Or dealers could sell this as a commuter rig with a few key swaps. This isn't so much a gravel rig as it is a hits all the marks rig.

One more thing- this bike costs $5695.00 USD. Hmm..... I wondered.... "What can you get for a motorcycle for less than 6G?". Ever Google that? You know, there are a LOT of capable rigs in the motorcycle arena and some even adept at doing gravel travel. I know....I know... These people on HPC's are getting a "work out", or whatever you want to say about their efforts. Fine. I'm not going there except to say that if you pedal an HPC, you aren't using the most efficient form of either a bicycle or a motorcycle. This seems .........odd. But carry on....

Either way, these are here and besides costing an arm and a leg for what you get, I suppose they are appealing to certain folks. They are complex machines, for sure, and servicing these things is causing quite the stir in the bicycle industry and with consumers. For example, you know how frustrating it is that cars all have these proprietary electronic servicing tools? Well, the situation with HPC's is fairly analogous to that experience. Be prepared to have some hassles with service if you need it on an HPC unless you happen upon a good dealer for the brand you own. And be prepared to open up the bank account when it comes time to pay. Right now it's the "Wild West" when it comes to service costs, but once things get streamlined on that end, you can bet the prices will be .......not cheap.

Andy and I, (well......mostly Andy, to be honest), did a thing the other day. We started a, some may say long overdue, You Tube channel for Riding Gravel. And maybe you could give a rip. I don't know. I just know that some people are visual and that they like seeing what we are reviewing and not so much reading about it all.

I don't know exactly how this is all going to go yet, but I can give y'all a few hints on what to expect. We aren't going to have anything fancy. No sets, no crazy video production. We might get a drone.....maybe. I am working on doing our own music for this. But simplicity is the main theme. So, it's going to be kind of different than many of the established You Tuber's channels out there that are in the cycling space.

It's going to stretch me a bit, for sure, (thus another reason to ditch the calendar thing), but I like this challenge more than I do dredging up calendar dates, so I am okay with that. The thing will be coming up with good content, and going into 2021, that may be hard to do. That's because there may not be a whole lot "new" to talk about. This will be detailed in my next segment..... 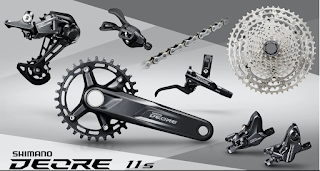 As if 2020 weren't weird enough, it won't stop affecting things well into 2021. That's because the disruption in the supply chain has been so damaging that manufacturers, in some cases, are not even giving future ETA's for important components and accessories needed to build bicycles. Think I'm nuts? Here's an excerpt from a manufacturer's letter to suppliers and dealers that's been circulated on social media:

"Component lead times are stretching way out into the future for new orders:

Fox will no longer quote a lead time
Rock Shox quote 250 days
Suntour and Tektro quote 210 days
Shimano stating July to October ‘21 with many dates already in calendar year ‘22
With this level of uncertainty there is no clear indication when MY22 will arrive."

Comments further indicate that these lead times are being modified out further since this letter was publicized. The authority of this info seems to be verified as well, since its source is one of the major factories supplying one of the "Big Four" bike brands. Another of the "Big Four" (Cannondale, Trek, Giant, Specialized) is telling its dealers not to expect MY2021 bikes until April at the earliest. This isn't just concerning mountain bikes, or high end, expensive bikes, but all price levels.

What does that all mean: Look after your drive trains, baby those bikes, and don't throw out those half-used up tires. Shortages are certainly going to roll through the retail sector for well over a year from now. New bikes? Some, maybe. Mostly hardly anything, at least in terms of wide selections. If you want a bicycle, it will be hard to find a certain model. It will be hard to get the spec you thought you wanted. You'll pretty much be having to take what is offered or go without.

Perhaps this will all be wrong, but indications I'm seeing are that these unprecedented shortages are not going away over the Winter, nor by next Spring, and probably not until 2022.

That's enough 'fun' for one week. have a great weekend, stay safe, and get out and ride!

To the point about value in motos, that Niner costs more than the base price of the motorcycle I have my eye on, the Honda CRF250L which starts at $5200 new. With a few mods and accessories, folks have ridden those bikes on very long dirt road adventures. And that's expensive compared to a used Kawasaki KLR650 that'll take you around the world.

I have fallen into the "get it now" trap in many aspects of my life. On demand lures us into what? Being demanding! Everything from bike parts, to toilet paper, to vaccines are demanded. I am working on patience, seeking alternatives to what I need, and learning from our present situation. Thank you, Mark for your writing and stimulating my thoughts about more than bikes!

With regards to the comparison between ebikes and gas-powered motorcycles:

There's a chance that the motor will be run by solar or some other alternative electric source to charge the battery. Recent weather-related events in the West, the Gulf Coast and even Iowa seem to indicate it's time-maybe past time-to stop combusting carbon for our recreation.

As for the bike itself, I would really like to try one!