Country Views: In Search Of The Mythical "Chicken-Duck"

"Didn't you see them?!!", yelled N.Y. Roll at me from behind me as we rolled onward up Cotter Road in the dark that morning, "You rode right past one! It was sitting on the railing!"

Thus my 'close encounter' with the mysterious animal N.Y. Roll calls the "Chicken-Duck" resulted in my not seeing one. Of course, it was dark, and I was looking at my glowing orb of light which was projected on the road ahead of me. Not off into the dank blackness of the surrounding area, although N.Y. Roll would later say that the creature could have been touched on the bridge railing had I outstretched my arm, it was that close. This near-miss was much to N.Y. Roll's dismay, and he's been after me to go check this out ever since.

That was almost two years ago now, what with 2020 being a solo-ride year for most of us. So, the idea to go search for this mythical creature was not on the top of my agenda. I had other 'quests' to undertake, but now that 2021 is here, this idea of finding the 'Chicken-Duck' has come up again. I was telling here on the blog how I had ridden South of town recently and N.Y. Roll pinged me to ask if I had seen the 'Chicken-Duck' yet. I told him I had not gone by the place where he claims these things are at.

Yes, as far as I know, this animal, if it actually exists, is found only in one place. A feeder creek to the larger Miller Creek near by is where N.Y. Roll has claimed to see these creatures on occasion. So, I had a Wednesday with nothing better to do, and I figured, 'Let's go see if I can find these things".

It was to rain, or so the weather people said, by around noon, so I toted my bike in my truck down to the CVNT trail head and started from there to save time rolling through Waterloo and Evansdale. I gave myself about two hours ride time which would take me past the area N.Y. Roll claims these things exist, but I also wanted to backtrack and cross Miller Creek in another area. I mean, who says these things won't travel? So I figured on taking Cotter Road down to Reinbeck Road, coming back to Foulk Road, and then crossing Miller Creek again on Foulk, and so have another shot at seeing these things.

I had to start on the CVNT and cross the Cedar River, then a short jaunt down to the intersection with Foulk Road and onward South. The chip seal eventually turns into gravel where you cross HWY 218 and then it is a short distance to a left on Miller Creek Road. I had fresh gravel all the way, but a strange sensation that I was riding well dialed me up to think that it wasn't me, it must be a tailwind. My turn left on Miller Creek Road affirmed my suspicions.

Great! Now I would have a headwind to end the ride with. Oh well..... Onward to see if these 'Chicken-Ducks' were real or not. I was figuring more toward the 'not' side myself, but what the heck! You never know unless you go and find out, right?

Well, I must have really bad luck in finding 'Chicken-Ducks' or N.Y. Roll has been eating past-date energy bars and hallucinating. I found zero evidence of any ducks, chickens, or mixtures thereof. All I saw were birds flitting about singing the songs of Robins and casting the warbles of the Red Winged Blackbird into the sky. Maybe the elusive 'Chicken-Duck' is like the Yeti, Big Foot, and Thylacines. Maybe they live in a parallel universe and N.Y.Roll just happened upon a portal one day.

It all was just too much for my dust-addled brain to take in at the time. So, I just rode on and tried to leave the whole cryptid zoology idea to N.Y. Roll. He could maybe get an image someday and just show that to me, right? (Remind me not to take any energy bars from him, by the way.....)

There are a lot of planted fields out there now, but I did observe some farming activities still ongoing concerning planting. At one point I was passed by one of those elevated sprayer machines. Those things look like alien spacecraft and sound weird with their hydrostatic drives. I also had no idea they could go that fast, but they can and kick up a lot of dust due to that.

The wind that was at my back going out was now in my face as I started back on Foulk Road. It wasn't too bad, but it was there and climbing the big rollers near Benton County was not what I'd call easy. As I rode up on to one of the taller rollers I thought about that old book I just got and how it told of the old Native American trails.

In that book it told of how the Native Americans would use high ground and the most direct routes to places. I saw as I looked out over the hill, a ridge line of hills running, more or less, from the Southeast to the Northwest. The high ground gave a view of the Cedar River Valley to the North and behind me I could also see for several miles. It struck me that the old book told of a Native American trail on the South side of the river, and how that trail avoided the timber which lined the Cedar on both sides. It would make sense then, that the trail may have run up on this ridge line of hills I was crossing over. 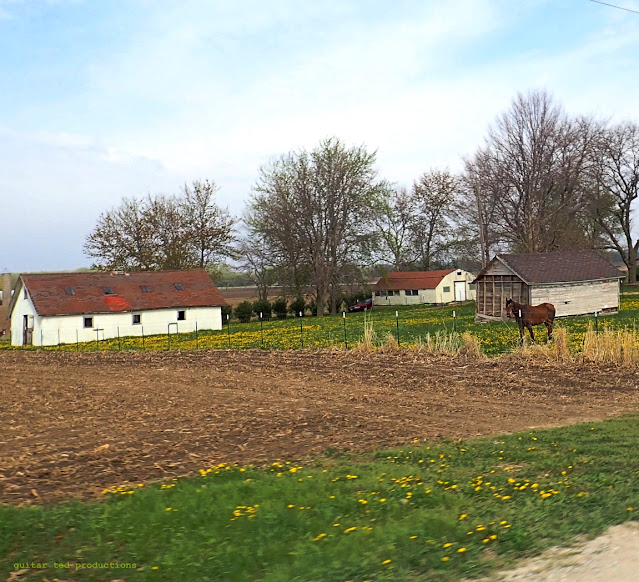 Of course, I had no way of knowing for sure that this was the case, but it was certain that at some point I was crossing the old, beaten in path the Native Americans traced out into the prairies by their single file movements of people and possibly the rare, prized horse.

That old book I have has a plat map of some of those older trails I need to look at closer. Maybe someday I can know with better information just where I might be crossing those old lines that once were there as I move across the gridded out crushed rock roads.

So, my ride ended finally as I reached the truck again. None the wiser concerning mythical animals nor the exact location of an ancient trail. But the ride was not a total loss. I had fun, I was refreshed mentally, and I got some physical exercise. All big pluses for this time of the year, which I rarely used to get out on rides for due to it being the traditional time when I put on Trans Iowa.

I'm sure I'm going to be hearing from N.Y. Roll about this though.....

this proves that birds not of a feather do not flock together, or you are just a strange duck....

@N.Y. Roll - Totally. I've always been a "Strange Duck", although I've preferred my SoCal friend, Grannygear's, description of me as an "International Man of Mystery". ;>)

@Phillip Cowan - Could be. Several farms have them around in this area.