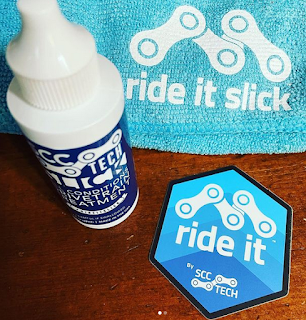 The next round of the "Guitar Ted Lube-Off" has begun and both of the new contenders have arrived. The first one I will cover here is the SCC Tech lubricant, or as they like to say in their marketing, "drivetrain treatment'. Kind of like STP, I guess.

But first, I wanted to quickly address a request heard from my original blog post last week and from social media. These pushes came too late, so I am afraid that regardless of the passionate responses, I am left with the only option I have at this point. Let me explain.....

A week ago today I posted the announcement for this new round of the 'Lube-Off' and asked for your suggestions. On Thursday last week, I announced my two selections for this round based upon the feedback I had gotten to that point. So, we're off and running. The orders were placed and product was on the way.

Friday, a "Jeff from Silca"made a near novel length comment pushing hard for Silca lubricant to be included. Then on Saturday, a no less weighty request came from another industry person on social media, whose opinions I regard highly, asking for the inclusion of Silca lubricant. Okay......look. As I stated, (I thought it was clear) in my posts last week, there were only going to be two slots in this round which were filled Thursday of last week. So, all I can do is to wait and ask you passionate about Silca lubricant to wait, until the next round of the 'Lube-Off' happens, which I guess is going to be right after this one, eh?

Now with all of that out of the way, let's take a closer look at this SCC Tech stuff. As you can see in the image, I purchased a small bottle of the lube and it came with that sticker and cloth you see in the image there, which I did not expect, but it was a nice touch. The lubricant's application process is online at the SCC Tech site. So, I hopped on there and did a little studying to see what I needed to do with my new chain and current drivetrain.

By the way, I am using a brand new Wippermann 11SB chain for this lube. The drivetrain is made up of a Shimano XT 11 speed cassette, GRX 1 X ring and GRX rear derailleur. In terms of the cassette, chain ring, and derailleur jockey wheels, SCC claims the lubricant will 'clean' it up, but I went ahead and 'dry cleaned' (NO SOLVENTS) the parts with a rag as best I could.

They don't really say what to do with a new chain, so I did not strip the chain down with cleaners, as I would typically do. I thought I saw where SCC claims you don't have to do anything there, but when I went to verify that I could not find that claim. Anyway, this stuff, if claims are to be believed, should handle whatever Wippermann ships chains with easily because it isn't much. A Wippermann chain seems to have a LOT less shipping oils/grease than say, a Shimano chain, and feels a lot cleaner than any SRAM chain I've handled out of the box.

So, SCC Tech wants you to put a drop of this blue lube on each link, rotate the chain a bunch of times, and then remove the rear wheel and clean the drivetrain bits. Well, I had started with a clean drivetrain, so I just wiped off the excess lube and let it sit overnight. Then I rode it the next day for about 45 minutes (to run in the chain and make sure everything was shifting good) and that was that. Mid-way through the ride I checked the chain with my 'Wipe Test', which longtime readers know is a simple swipe of the finger tip across the mating side of the chain. I did get some wet, blackish residue, but as SCC Tech says, this is simply the lube working out anything in the chain and drivetrain that shouldn't be there.

My impressions of this blue colored lubricant is that it is about the same viscosity and feel as DuMonde Tech, it just lacks the latter lube's aromatic element.  It went on easily, wiped clean easily, and left the requested 'sheen' on the black side plates of the Wippermann chain.

It should be noted that SCC Tech claims this lubricant is neither a "Wet" nor a "Dry" class lubricant. They call it a 'drivetrain treatment' which is fine as long as I don't end up with a bunch of caked on limestone dust after every ride. We will see.......

Now a brief word about the chain, in case you are curious about Wippermann chains. I used the Shimano chain sent with the GRX group up until this point and so there is a distinct difference here between the two chains. Immediately I noted a much louder and authoritative 'ker-chunk!' with each shift of the gears. It was quite reminiscent of how a SRAM drive train sounds when shifted. After riding for 45 minutes though, the sound deadened out quite a bit. I'm not sure if that was due to the lubricant or just the chain 'getting acquainted with' the rest of the drive train.  Of course, this being a clutch derailleur and 1X, the drive train is going to always have a bit more noise when shifted.

You don't get that sort of an experience with a Shimano chain. It just runs with whatever noise it makes for its lifetime, and that isn't much noise at all. So, I'll be keeping an eye out for where this goes as I keep using the Wippermann chain. Shift quality was fine, and speed of shifting was excellent, but I did a bit of a tune-up as well, so keep that in mind here.

Stay tuned for the next contender- The NixFrixShun "Blue Devil" lubricant.