When Is It A Bicycle Or A Motorcycle? 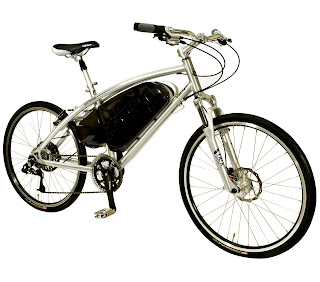 <===They say it is an electric assist bicycle, I say it is a motorcycle.
There is a big problem coming down the road, around the curve on the bike path, and up your sidewalk. It's called by various names, and it comes in the guise of something good, green, and environmentally friendly. It is the electric assisted bicycle. Well........that's one of the things "they" call it!
Here's the deal: I'm going to give you the current reasons why this is said to be good, and then I'll debunk each myth afterwards. (Yes......I am not a fan! So beware!)
They say: One of the biggest reasons given for this electric motor equipped cycle as being good is that it will "get people that normally wouldn't ride a "bike" to ride and will turn more folks on to bicycling."
I say: Not in a million years! This is the biggest farce of the whole deal, (next to the fact that "they" deny these are motorcycles, but that will come in a minute...) there is no way that these will turn folks into cyclists. Why? That's easy. Number one- People are lazy. Really.......I'm sorry to bust your bubble. But it is true. Folks will run off the current available then whine when it runs out because they had to pedal the last mile home. And they will really whine when they are pedaling a 40-50lb beast that was never intended to be an efficient pedalling device in the first place. (Take a look at my random pic above if you need an example) What it will do is this: Turn folks into scooter riders, and possibly into motorcyclists. (The internal combustion type motorcyclists, that is) If you don't have to work, why would you? That's where these "non-traditional" cyclists are going to come from anyway, from cars. They will have a car mentality, not a cycling one, and therefore they will not become cyclists based upon their riding a motorcycle. Period.
They say: "They" call these "electric bikes", "electric assist bikes", "Light Electric Vehicles", or "Electric Motorized Bicycles". (Based upon a Google search of "electric assisted bicycles")
I say: Hmm.........let's see here. Electric motor + Bicycle = motorcycle. Period. It has been this way since the early 20th century folks. Where do you think motorcycles came from in the first place? From bicycles, that's where. Folks bolted an engine/motor to a bicycle because it was faster, easier, and more convenient than a bicycle. Especially when you considered longer distance travel. Again, people are inherently lazy, will take the easiest way out, and love gadgets. It's been that way for a long time, and these so called "electric assist bicycles" are nothing more than a modern re-hash of what took place over a hundred years ago. Folks will convince themselves that they are not "motorcycles" since they are not "internal combustion" powered, but I am sorry- It doesn't matter what type of motor it is, it is still a motor! Don't get sucked into thinking these are anything but motorcycles.
You might say that these rigs have pedals, and can be used as a bicycle. Uh huh.......riiiight! Can you say "moped"? We've been here already folks, and the result will be exactly the same.
They say: You will be able to use these right alongside of traditional bicycles. Municipalities will will welcome these with rights given to the electric assist cycles to ride bike paths and in bike lanes.
I say: "Impending disaster". If, (and that is a mighty big "if") these rigs are allowed onto bicycle paths and bike lanes we will see a huge increase in the accident rates with the resultant injuries these accidents will produce. Why? Because of speed, that's why. I demoed an electric assist bicycle a few years ago that had a top speed of 35mph. Now for comparison, there are not too many folks that can ride a sustained 35mph on a bicycle, and most of those that can are racing professionally. In other words, it's really rare. These electric assist bicycles will bring these speeds to bike paths and bike lanes on a regular basis that don't normally see this sort of speed with their normal user group- bicyclist. In fact, we as bicyclist ride bike paths and bike lanes to get away from speeding traffic. It's dangerous, and letting electric assisted bicycles- ie: motorcycles- on these safe havens of cycling will ruin all that we have achieved for safe cycling in the past 30 years.
And if you do not think that the riders of these electric devils on two wheels won't go at max speed, you are smoking crack. I already am hearing conversations amongst tinkerers about how they can make these rigs go even faster.
Okay, so what if we designate these to the streets? Okay, fine. What did you think the last time you saw a moped out on a busy city street? Uh huh............that's the same thing that will happen with these under powered motorcycles. Think about it..........
They say: This is "green" transportation. No gas burning. No oil usage. Friendly to the environment.
I say: Okay, to an extent, this is true. However; have you taken a look at what powers these things? Batteries, that's what. And batteries have their own dirty little secrets. Like chemicals to make the batteries and charging consumption to keep them full of energy. There's no free lunch. That energy comes at a big cost, although it is hidden well. And I won't even get into the disposal issues with batteries. Green indeed! A luminous, glowing chemical green!
So, when you hear about how great these "electric assist bicycles" are, and how they will revolutionize the way people see cycling, and how good it will be for the environment, I hope you will see through the "snake oil" and remember that nothing beats a good ol' bicycle.
Ride On!
Posted by Guitar Ted at 1:00 AM