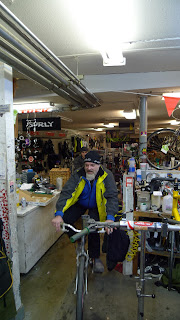 Well, one beer led to another last Friday night and the next thing ya know, we're riding bikes around the shop. It was pretty sketchy, as you might imagine. Not only were we well on our way to three sheets in the wind, (does anybody get one or two sheets in the wind? Hmm......), but it was dark on the back half of "the course". There was a ramp at one point over a step and lots of tight spots with stuff that could cause serious damage. In fact, I ran into a bike in the work stand not once, but twice, ramming my left hand into an empty rear drop out. Ouch! And yes.........it drew blood!

Well, after we had gotten our ya-ya's out riding around in circles at an ever increasing speed, and the beer was gone, we decided to vacate the premises for a local bar. 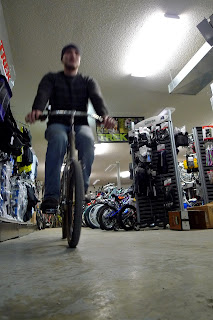 Northfield has two private colleges in its city and the bar we went to was indeed a college bar. We commandeered a table and got some pitchers of Guinness. Good conversations were had. I am quite sure of it. At least I do not recall any raised voices or furrowed brows. I'm sure I'd remember that!

Anyway, we ended the night and walked back to Mike's to get into Ben's car so he could drop me back off at the motel. It was a snowy night and rather pleasant, actually. Oh yeah........and rather late! I was bound to get very little sleep, as I wanted to get to Frostbike by the 8:30am start time.

The next morning came way too soon and I crawled out of the sack to munch some of the free vittles at the motel before bugging out to Bloomington just 30 miles up the road.

It was super slickery/messy. Every dang semi tractor trailer rig was spraying up a storm of mag-chloride and water everywhere to the point that it was almost blinding. I made it though, just not at 65mph! 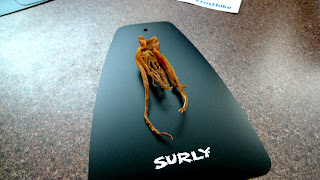 Once in the show, I made my rounds and stopped to talk with some old friends and acquaintances. Over at the Surly booth, they had several products that their Japanese distributor dropped off the night before. One of theses was "squid jerky", although I am quite certain that is not the proper name for it. I actually ate some. It smelled like a nasty beach, but tasted okay. The main thing was that it was just about akin to chewing shoe leather soaked in salt. Yeah.......don't try it if you've had dental work!

The rest of the show was spent in much the same way. I got to sit down a bit with J-Kove, I got to run out for some pizza with Gnat, and closed out the show having a can of Fat Tire with the Salsa Crew. (Yes.........New Belgium comes in cans now!)

The drive home started out great, and then icy patches slowed me down to 45mph at times. It was even snowing in Clear Lake! A couple of Amp energy drinks later and I was home, exhausted, but happy to be back.

If you are interested in the bicycle news I gathered, that can be found here. That's all for Frostbike 2009 folks! Now it's back to your regularly scheduled blog posts!
Posted by Guitar Ted at 1:00 AM