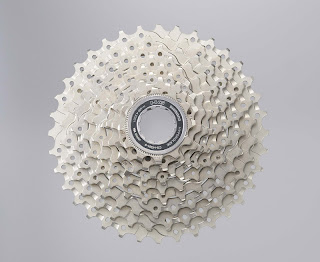 <===Shimano is set to introduce this 12-36T 9 speed cassette soon. (Courtesy of terrengsykkel.no)

Recently it was revealed on a thread on mtbr.com that Shimano will introduce a cassette with a 36T low gear. There have been calls in the 29"er ranks for lower gearing, and this would seem to be a n answer to that call. However; there has been more bickering about deficiencies in weight, and of rider strength, than praise for at least an acknowledgement of the call for this lower gearing. Ah.......the wonder of the forum shows itself again!

I suppose it is too easy to say, "just don't buy it then.", since that takes away all the fun, but having said that, let's take a look at the reasons for and against such a component. 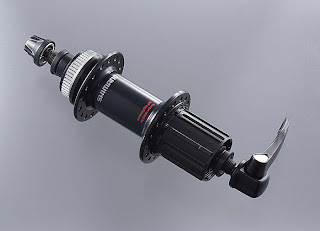 <===Shimano will also introduce a hub to go with the cassette that will feature a stronger free hub. (Courtesy of terrengsykkel.no)

First off, the weight thing. Shimano could have made it an XT level cassette, which all the weight weenies would have loved, but think about a few things here. One: Shimano needs to sell these things to folks and an XT version would have been quite expensive compared to this HG/Deore level cassette. Secondly: The XT level cassette isn't necessarily built for high torque loads, the very kind of loads that a 36T cog is going to generate. Shimano isn't going to spend the money on this (probably) low sales numbers cassette to re-engineer it to withstand those loads and be at an XT level. Not when a Deore level cassette can do he job with little to no extra cost to manufacture. The very notion that a special free hub body/hub had to be developed to accommodate the expected torque loads should be enough evidence to support my theory here.

Need. That word that some say in support of this product and some say that there is none of. Well, as I wrote on the mtbr.com thread referenced above, "I was as big a naysayer as anyone on this thread, but again: Sit down and talk with someone that rides these crazy climbs and high altitude stuff. Have an open mind, and you'll get it"

And to those who just don't get it, I say this, "Just don't worry about it. It isn't for you then. That's fine." I think a lot of folks will use it, and not just for 29"ers, and not just for mountain bikes. The low 36T gear will most certainly make it to touring bikes and tandems. Lower gears there will mean less shifting at the font derailleur, which most users will find a nice thing. Probably other unforeseen uses will come about for this cassette as well.

Crank sets: Some will argue that the 20/30/40 T crank set will eliminate the need for this 36T cassette. I would counter with the fact that those gearing choices are a much more expensive route to take to the solution than the cassette is. Especially now with the Middleburn and Surly solutions out there. Then you might just want both the cassette and the crank set, which a lot of the critics of the cassette seem to miss in this debate.

Of course, the cassette may not play well with every derailleur set up, and if you put it on a hub that isn't up to snuff in terms of torque load handling, you may end up walking anyway, but I think the 12-36T cassette is a great step in solving the gearing complaints that some have had against 29"ers since the beginning.
Posted by Guitar Ted at 1:00 AM