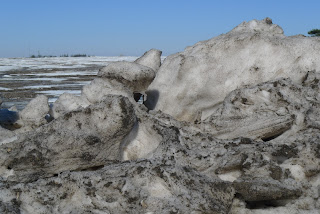 <===The sun is really doing a number on the snow here.

Today was an awesome day to be out. I do not know what the temperature ended up being, but I went gloveless and wore just a thin wool pant beneath my knickers today. Awesome to be able to shed some layers. I actually got sort of hot going with the wind. 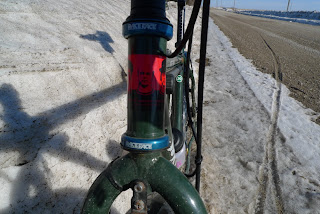 <===The east/west roads were pretty soft.

I did about two hours at a measured pace today. The wind going west was tough. But, as ol' Jeff used to say, "The wind is our mountains." So be it. I pedalled along through it all just fine.

It was just an awesome ride anyway you slice it, especially after the winter harshness we have endured here. 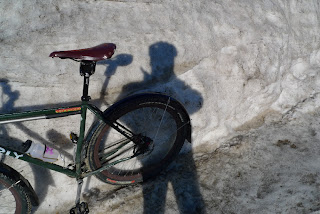 So I toodled along in my 36T X 20T gear set up, not caring to go fast at all just yet. The fenders came in mighty handy today. I had to go through water running down the streets on my way out and back in. The water running in the ditches and drainages is amazing. It's good that it will go below freezing at night for a time, because the runoff is going to cause flooding if it doesn't get slowed up a tad. 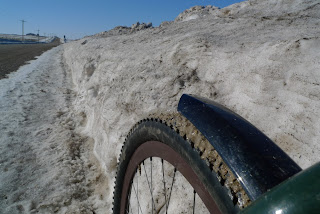 <===Giant drifts populate the roadsides out in the country.

I saw lots of snowless field exposed, which means that the temps can get higher easier now. The drifts? Well, that's another story. Those giants will be around awhile. I saw some far bigger than I have pictured here, which was just an "average" sized pile. 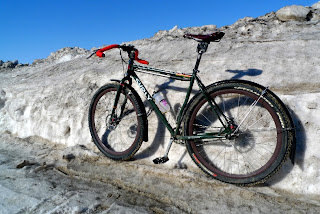 <====The Monkey is needing some tweakage.

I need to somehow get that bottom bracket out of the Monkey. Last time I tried, it didn't show any signs of wanting to budge, and now the bottom bracket bearings are making some racket. It's time to pull it down, somehow! I'll wait for a bit till "fender" weather blows by, or..........put the fenders on the Fargo! But wait...........nah! I have another project that the Fargo needs to be involved in, which means I'll just have to live with the crunchy BB for a bit. It isn't terrible yet, just on its way out, that's all. I have a little time yet. Not much, but a little.

Okay, I sure hope the locals got out, and I'm sure they did. I saw at least one lonely set of tracks on Ansborough today. So, someone was out before me! Have a great weekend!
Posted by Guitar Ted at 11:03 PM