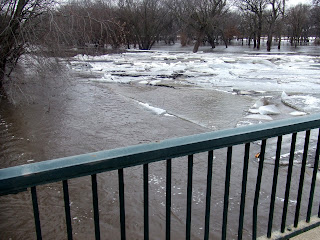 <===The ice jam on the Blackhawk before it washed out on Thursday.

Well, even though the temperatures have decreased a bunch here, the after effects of the melt over the past weekend are still being felt. The Black Hawk and the Cedar were way up and flooding low lying areas around the area.

At least the moat in front of my house has moved on downstream! I don't have to wade out to the car anymore when I need to drive it. 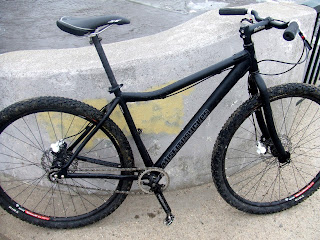 <===Misfit Dissent out getting dirty.

I was able to find a few places where I could get in some testing on the Dissent. Not really single track mind you, but dirt and climbing were found. I just had to be creative!

The dikes on the Black Hawk make for great climbing hills, and some double track inspection road alongside the dike, along with some dirt roads in the cemetary worked to get rubber on dirt. 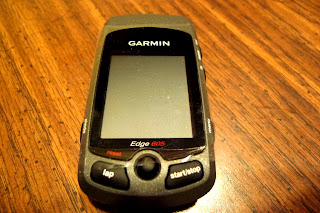 <===Trans Iowa will never be the same.

Garmin stepped up to support Trans iowa with the donation of this Garmin 605 unit. It's bicycle compatible, and they even sent some mapping software with it so we can plot the course and get accurate turns and most importantly mileage.

Besides this, they are also supporting he event with two more GPS units as prizing. Awesome! Now to get out there and see if I can get the whole course mapped and locked in. Should be some fun times ahead.

I hope ya'all can get some riding in this weekend. Spring is just around the corner!