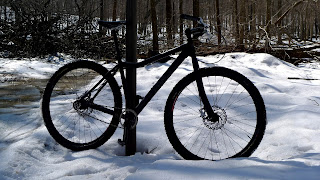 I did a little recon of a couple local (to me) riding spots. First I went out to check on Cedar Bend Park, but the gate was up out at the blacktop and the sign said that the park wouldn't open until May 1st. Fair enough. I didn't want to incur the wrath of any locals or authority figures, so I moved on.

I made my way through Waverly and then on out to Camp Ingawanis. The gravel was pretty soft in spots, but the roads are all clear now. 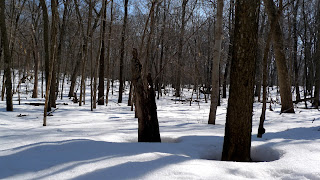 The South Side was my aim and when I got there it looked like the trail was at least partially clear. It was 50 degrees and the sun was out, so minimal clothing was on for this attempt at riding. It felt great not to have to layer up so much. Probably the least amount of clothing I've worn since The Fargo Ride in Minneapolis last November. 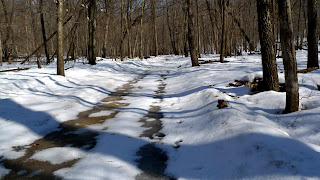 <====The service road was the best bet for riding.

The trail soon disappeared under a blanket of snow. I followed along, and then when I saw it was going to be fruitless to follow the singletrack, I looked for the service road.

The service road loops through the South Side to the creek. I followed along till I reached that area, and then bearing right on foot, followed the stream for a bit until I saw a good place to scale the ridge above the creek and look for the service road back out from the Cope Course. 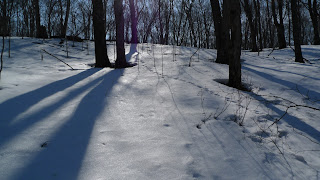 The Camp is home to a wide variety of wildlife. I saw the tracks of many woodland creatures as I traversed the ridge heading eastwards. Turkey, rabbit, bobcat, and the ever present deer were all tracks I saw. At one point, I detected some movement and thinking it was a deer, I swung around to my left to see two Bald Eagles flying swiftly up the line of the creek. I was up high enough that the eagles were right at my eye level. Cool!

I finally reached the service road out and went rolling down the hill towards the car. A great time out in the woods, even though the riding was minimal and slow. It'll be awhile before the trails are rideable.

Even though the snow in my yard is about gone, I'd say there was a good six inches blanketing the floor of the woods yet. That will take awhile to melt away too, as it is dense and packed in. I could walk right up over it for the most part with no post holing at all.

Even if the snow did disappear, the logging that took place last fall has made a mess out of certain places out there and I'm sure a lot of trail work will be necessary before we can rage some South Side single track anytime soon.