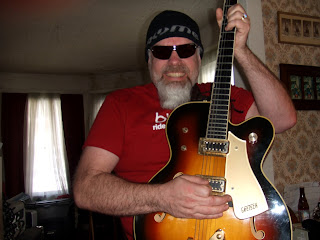 <===Furry riffing.......
April/May/June: Boy, did things ever get crazy starting about right here in the year! First up we had the ongoing tribulations behind the scenes with what was to become of my web writing career, such as it was. It was not being resolved, and so on one hand I was planning a new website venture with an old Crooked Cog writer and on the other hand I was trying to get the Twenty Nine Inches deal done. Stacked on this was my trip to Sea Otter, planning for Dirty Kanza, and final preparations for Trans Iowa V5. I also had a family vacation to plan and my regular shop job was heating up with the weather. Cyclists were coming in with repair work which I had to stay on top of with four days of work there to do it in.
Sea Otter was bittersweet. It was my last hurrah with the old set up on Twenty Nine Inches. Tim, the former owner, was not along for the trip, and I was out on my own for the first time ever. I did get to meet up with my new contributor/web conspirator Grannygear though, so that was a highlight for sure. The Cyclist was launched with the aforementioned former Crooked Cog writer, but after a few weeks, that writer backed out due to some weirdness, and Grannygear stepped in graciously to assist. By this time I was the sole entity running Twenty Nine Inches which was a shambles on the business side, but was chugging along nicely otherwise.
Then it was Trans Iowa V5 time. That event went off really well. So well in fact that d.p. and I decided on a T.I.V6 at the finish line of T.I.V5 at the end of that event. Again, an epic time was had by all and as always, it was a special, memorable weekend for me. Things were in a bit of a slow down for a week or so now, which was a welcome thing! I got in some awesome training rides for the DK 200. I was really feeling much better about riding the full 200 miles than ever before. Even friends were commenting on my form. Well, as the event approached, I contracted a head cold and well, that about shot me in the foot.
I DNF'ed due to being sick, beating myself up in an ungodly wind, and suffering under a blistering hot sun. But after that day, we split Kansas for a friends place in Nebraska for a week and I had an incredibly good time. I rode some sweet Nebraska single track, and hooked up with my good friend, Matt Gersib for some great times. Then it was back to Iowa.
Then it was Guitar Ted Death Ride recon time, some test riding at the Camp, and general life pacing for the rest of June. The weather was fine, and summer was coming on, but it was strangely cool for this time of year. Well, the weather may have been cool-ish, but the happenings were heating up again! Next post on the Rearview for 2009 will happen on Wednesday. Stay Tuned!
Posted by Guitar Ted at 1:00 AM