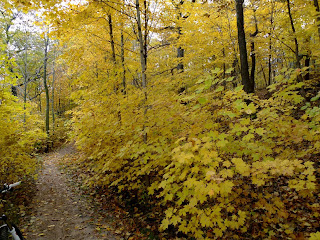 <===I was rewarded with a primo fall color ride in October. The air was literally golden!
October/November/December: Well, this month started out on a somber note when my father in law had to go in for emergency open heart surgery. Not only that, but due to the circumstances, I had to cancel my participation in the Big Wheeled Ballyhoo. First off- Thank you Matt Gersib for taking up the slack there. I let you and everybody down, and I felt like a total chump in the early part of the month. While it was out of my control, there it is. I felt about as low as you can back then. Thankfully I was able to get in some awesome fall color rides that picked up my spirit again. That golden color was awesome and that one ride in particular was like being in another world entirely.
The Ballyhoo itself suffered a freak snow storm but even though attendance was not what we originally had hoped for, good times were had anyway. My feeling, and this is just my personal opinion, is that the Ballyhoo idea is just cursed. At least from my end of things. I've been clubbed over the head twice now. I get the idea. Don't look for me to be involved in promoting that again.
Moving on from that personal low point, I was spending the rest of the month getting things in order to close out some testing for Twenty Nine Inches before the snows came. I also was getting the first recon of the T.I.V6 course readied. That happened and d.p. and I were really excited about the first quarter of the course we got to lay eyes on.
Besides those two huge events, I got a lot of riding in on the Salsa Big Mama, I got the Gun Kote Salsa El Mariachi back and started to build it up, and my long running "Touring Tuesdays" took it's final bow in the beginning of November. I did start up the "Trans Iowa Thoughts" posts though in October which will help keep folks in T.I.V6 up to date with how the event develops.
November kicked off with a big, big surprise from my friend George Wissell from Bike 29. I had been giving him some grief over three NOS purple anodized Chris King headsets he acquired. Well, he saw my El Mariachi, and gifted me one of the treasured purple ano headsets to install on it. (Once again- Thanks!) I was floored!
Then I started out with a new series for the replacement of "Touring Tuesdays" called "Bike Shop Tales" which is going to be my outlet for telling the story about my early shop rat days at Advantage Cyclery. I also posted a retrospective on my year with Salsa Cycles Fargo.
After a week or so into November, there was a big pow-wow in Grinnell about Trans Iowa V6 which got the ball rolling on a lot of details concerning the event. I posted the registration announcement immediately following and the madness of post cards, gifts, and people coming out of the woodwork to get into T.I.V6 began.
In between all of that I got in a great gravel ride with A-Lo, d.p., and for a short bit, mtbidwell. I also raided the Camp for the final times doing last minute Specialized 29"er testing, and did a lot of after work rides for the same reasons. Winter was coming. The fading daylight, the feel in the air, and the Turkey Burn Ride all pointed to snow and soon.
Well, we barely got a week into December and we got not just a little dump, but we got walloped with 15 inches of snow which shut down not just the off road cycling, but just about everything. So, I turned to writing to take my mind off things. I started Gravel Grinder News to chronicle all the gravel racing/culture in the nation these days. I also did a lot of stuff on the sites I write for, getting year end stuff in order.
Finally, it always amazes me, but this time of year is when a lot of gear testing opportunities crop up and I was busy with a lot of that coming right into the end of the year. The snowing, blowing, and cold still persists, and getting to ride is really tough now. Hopefully 2010 won't continue like December has!
That's a wrap on the "Rearview For 2009". I will follow this up with an outlook for 2010 in my next post.
Posted by Guitar Ted at 1:00 AM