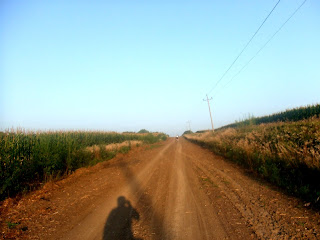 Rawland Asks Your Opinion: Rawland Cycles is asking for input on a re-design of the Sogn. Check out the blog here and weigh in. The re-design is going to focus on a non-mountain bikish, rig that would be a different rig than the current offerings that Rawland has.

I will say that since Rawland started out as a 650B specific company, you'll run into a lot of 650B banter in the comments, but don't let that stop ya! I have to ask though, "What does a 650B tire, in any size/width, on a more road-ish bike, do better than a 700c one, other than be different for different's sake? Maybe someone could chime in here on that. It would seem that the road going brethren have chosen 700c as the optimal size, but maybe I'm reading this all wrong.

I'll say one thing, I don't know that I've ever seen one single 650B bike at a gravel event that I've put on, or attended. Mountain bikes, yeah....that's a different story, but not on a "rough road" bike.   Anyway..... 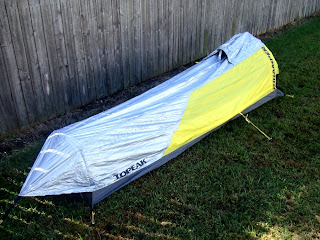 Bikepacking: So this has been too long in coming, but I have finally gotten my mitts on a proper bicycling/camping tent. This is a Topeak "Bikamper" tent/bivy dealio. It is a bit unique in that it is held up with a combination of stakes, guy lines, and bicycle tubes. (You could use a 26" front wheel on the "big" end, but I don't have bikes that fit those wheels) The thing with the tubes is kind of cool, but also a bit puzzling, since the "little" end uses a 16" tube, which you might have on a trailer, but still. Weird.

I have not spent any time to speak of in such a tiny tent since my youth when I had a "pup tent". This is, by far, even smaller than that. Very cozy! I'll do some following up on this experiment, but I may be looking into something else later.

So I will now have to do some other gear experimentation, but it is looking as though I am finally going to start doing this. It's been a long time coming. Too long!

Trans Iowa V7- Floating Some Ideas: I have been kicking around a few ideas on the course and for registration with d.p. via e-mail. We're forging a clearer picture of T.I.V7 now  and I hope to make an announcement concerning the registration process soon. We've got a lot of options on the table for completing the "big assed loop", much of it already figured out, but we also have quite a ways to go concerning the details. So far, we've got one, possibly two, checkpoints arranged and at least the first third of the route drafted out. My hope is that d.p. and I can arrange for some more night time gravel grinding "think tank-recon rides" to fine tune things further.

I think the roster size will be tried at 100 to start out with. Keep in mind that traditionally, we've been lucky to get over 50 people to show up on average for all the versions that we've done, even with T.I.V3's "unlimited" roster limit. My sincere feeling is that if we get 75-80 folks in the end it will be a miracle, and that would most likely be the most we'd ever get even if we said, "Come one, come all". (Which we are not going to do, for several reasons)

Have a great weekend and ride yer bicycle somewhere!
Posted by Guitar Ted at 1:00 AM

Curious to see how you like that Topeak tent, I have a hard time gettimg to like a one-man tent, right now I'm using a cheap Wenzel one-man tent. I'd really like to splurge on some type of Big Agnes two-man type of tent as most of theirs are really light weight & I like extra room to stretch out or store gear.

great to see you easing into the bikepacking stuff, I'm progressing with it as well & recently came up with a budget set-up for hauling my gear,check out my blog to see it. Perhaps we can do a bikepacking 101 trip yet like we've discussed in the past.

I am confused about the 650b thing, too. I think Grant Peterson might have something to do with it.

Don't want to insult anyone's intelligence, but 650b was a fairly popular size in France back in the day for touring and rough-road riding. Best as I can tell, the main draw in this day and age is that older 700c road bikes can be retrofitted with 650b wheels and long reach brakes, thus allowing fatter tires than would otherwise be possible. I think that's where Grant Peterson comes in - he is always big on fatter tires for road riding. Otherwise, 650b afficanatos claim that 650b wheels spin up quicker than 700c. And, of course, 650b just has an all around Europhilia that many find appealing. I'm a little surprised that GT hasn't seen any 650b-equipped bikes at gravel grinders, since that supposed to be 650b's forte. You'd probably see them at a randonee.

Squirrel used one of those Topeak tents on a sprink S24O that we did. He's not a big man, and even he said it was good for laying down and sleeping and that was it. No changing clothes or anything.

I think most people get scared with the 320 mile distance and that is why they don't show up. It is easy to get hyped up about doing it and they dropping the idea, the bad part being the ones that don't say anything until last minute and kill a spot for a person that really wants to participate. I know that once I know I have a spot on the roster I go mad training all winter.
You guys decide what is best.
sincerely,

@Angoraknitter: Yep! Spot on with your historical references. The thing is, one has to also consider the "why" of those historical 650B uses. You hit on one with the desire for a fatter, more comfy tire on a road bike. 650B was great for that. Why? Because 700c fatties didn't exist and there wasn't room in production frames for them even if they did. Bruce Gordon was one of the first to address that with his famous "Rock and Road" bikes.

My point is that with the availability of fatter, excellent 700c road tires now, 650B has a tougher reason for being, especially if a "rough road" production bike that has a budget price can be made.

The Rawland idea, and the Salsa Caseroll for 2011, (Cantilever brakes!) will be two great contenders.

@Steve Fuller: Yeah, Squirrel hit the nail on the head. That and it doesn't breathe too well. I tried it last night and wasn't all that impressed. I am pretty sure a tarp tent, tipi, or similar bike packing tent will be better.

@Ari: Thanks for your past support! You are correct on your theory as far as attendance goes. 320 is monumental and that kind of ride does scare the pants off a lot of folks.