From The Fire Into The Frying Pan 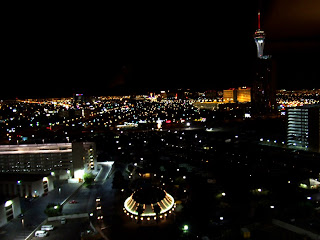 My first reaction is "Awesome!" I am not at all a fan of Las Vegas and what it represents. Call me crazy, but I always feel slimy and spent in spirit once I leave the place. It isn't at all pleasant.

No offense to the residents there, and I will admit, if you get away from "The Strip" it becomes much like any other Southwestern desert town, but Interbike is held in the heart of "The Strip". When you attend the show, you are swimming in the cesspool of what I feel is the worst part about Las Vegas. Again, that's maybe just me, your mileage may vary.

Of course, if Interbike is leaving Las Vegas, it has to go somewhere. They were thinking of either Salt Lake City or Anaheim, California. I've been to both places. They both could work for holding a bicycle trade show. Maybe logistically SLC has a bit of a disadvantage with the demo area being so far away. (Admittedly, I don't know where the demo area is at Anaheim).

Well, they chose Anaheim. Let's just look at that for a second. Dealers didn't really warm up to being in Las Vegas, saying it was "anti-bike culture" and well, I've a feeling a lot of folks were feeling the "slime", just like I did. However; if Las Vegas isn't "bike culture, (and make no mistake, it isn't), then how can going into the heart of "car culture" be more appealing? (Shrugging shoulders) That's just odd.

Now let's look at something else they did. Interbike changed the dates for the show. Feeling pressure from Eurobike, brands holding dealer camps, and from some new start ups, (Dealer Camp, Outerbike), I think Interbike's think tank decided a date change was necessary. They went to an earlier date of August 1st-2nd for the Outdoor Demo and August 3rd-5th for the show indoors. Bottom line: Bad idea for a lot of  independant bicycle dealers. They are still in the thick of selling season at this time. Do you think an owner, managers, or staff will be able to go frolic amongst the cars and smog of the LA basin during early August?

I don't think so, and these are the folks that Interbike needs to have come to the show.

On one hand I'm glad this is the last trip to Vegas for Interbike, but on the other hand, I am not very convinced they made good moves with regards to the place and dates for Interbike 2011.
Posted by Guitar Ted at 1:00 AM

last time i went to interbike was in anaheim. fat chance had a booth. i ordered my shock-a-billy. the demo area was super weak. i bought a cooks jersye. i'm not sure if there was an outdoor demo. perhaps i missed it. might have been days earlier. car culture for sure. i drank gallons of espresso.

Yeah no doubt, the shop doesn't start to settle down till the first week in September, August is actually one of my biggest months, with July just edging it out because of RAGBRAI. Just doesn't make sense to set up earlier, later would be better, October would be great.

Now I've never had the oprtunity to hit up Interbike, don't get me wrong I would love to, but I have never really had any desire to visit Las Vegas. That is the sole reason I've passed on going in the past, didn't want anything to do with Vegas at all. But now they're sending it to Cali, ehhh, someone needs a brain exam for sure!