The Local Scene: The Kickstand

I live in an area that is a unique one with a pretty strong cycling culture. I figured that I would start a series of posts under the moniker, "The Local Scene", in which I could talk about some things we have going on here in regards to cycling and its related activities.

I'd like to kick that off with a visit I made to a new local establishment that has tied its fortunes to the local trail scene, The Kickstand. It's a coffee shop and more.... 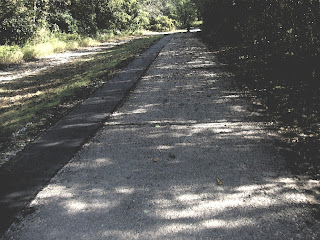 I live in an area where there are a lot of paved bicycle paths. The oldest and most well known of these, (an image of which is shown here), runs through a State Park, but we have close to, if not over, 100 miles of paved bike paths that are really nice.

As you can imagine, these are quite a draw. In fact, we have tourism based on these paths as a destination for cyclists from around the country. Since that is the case, a local couple decided to open a coffee shop near the trail system in hopes of garnering some business from trail users and make some new friends along the way. The place is called "The Kickstand", fittingly enough.

The Kickstand is located a stones throw off the trail on 12th Street just before you cross Dry Run Creek going south away from Cedar Falls. The bike path runs about 50 yards from The Kickstand's front door, which is located on the patio behind the owner's home. It's pretty nice and intimate, and on a nice day, you can sit around at tables provided outside, or step in to the cozy confines of the coffee shop itself. 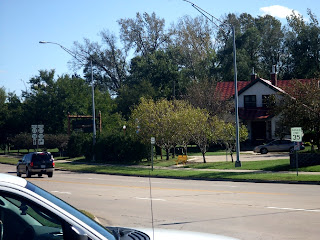 <===The Kickstand is located behind the home of Heidi and Steve Aldrich, which is located at 317 East 14th Street just off 12th, shown here. (That's their home in the image)

I decided to stop in on Friday and have a look-see. It was a beautiful early fall day and the weather was great. Heidi Aldrich, one of the proprietors, was  behind the counter and greeted me with a warm smile. I ordered up a "pour through" coffee. Yeah.....I had never heard of that before, so I had to try it out. 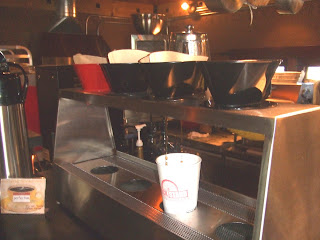 <===A "pour through" happening right before my very eyes!

Well, it wasn't long before I had chosen a dark roast from about four types of coffee available for a pour through and watched as Heidi "poured through" some hot water on the grounds and then the coffee came dripping out into an awaiting cup. Cool!

And it tasted fantastic as well.

But that isn't all The Kickstand does....oh no! They had pies with your choice of whipped cream or ice cream toppings, and the pie could be heated up. They had some other pastries and sodas to wash it down with if coffee isn't your thing. Heidi also showed me some cold pressed coffee which tasted very good! I think they even had a few souvenir trinkets and what nots to sell as well. 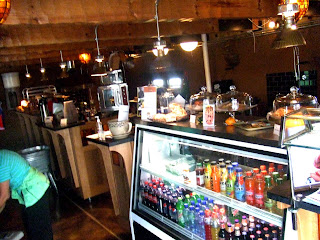 <===The Kickstand has a cozy, warm, inviting atmosphere.

As I sat and consumed my delicious coffee, Heidi explained to me that she and Steve want to start bringing in some entertainment and grow the business as a place to go for all trail users and even those that come by car!

I figured I'd even use The Kickstand as an excuse to roll my upcoming Salsa Cycles Mukluk out for a December cruise and warm up inside with a hot, steamy cuppa-joe, then return to Waterloo afterward. (That's right, I am buying a snow bike!)

The business is still being fine tuned, but it is well worth a stop and the coffee is black and really good! I give it a hearty recommendo. Check out The Kickstand soon, ya'all!

Sweet! I've purchased jeans at their garage sales before. Fine people for sure. Neat house too! Their backyard has a secluded peaceful feel to it despite being in the middle of such a busy area. Cool! I will stop in for treat soon.

Very nice place and they have an espresso machine on the way. And an interesting connection to the local biking scene is that Brain Bowman is Heidi's brother - arguably one one the best racers to come out of the Cedar Valley.
John