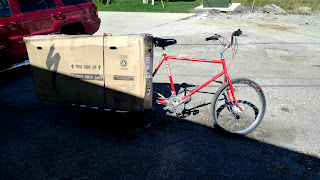 Here is an image of the Xtracycle'd 80's Schwinn Sierra I recently threw together as a work bike to haul stuff when I need to and the weather allows. Things came together for a maiden voyage yesterday as I had to take a bicycle that had been reviewed on Twenty Nine Inches back to the shop to be picked up by the UPS man, (aka "Brown Santa") The "voyage" went perfectly, I might add.

This bicycle is truly thrown together as well. I literally am almost devoid of anything 26" specific these days, so finding this bicycle, which had been in storage out at Captain Bob's for a long time, and the wheels and tires was not an easy task. In the end it all came together though, and it works reasonably well. Well enough to make a good delivery sled.

No! Say It Ain't So! (Reprise) Well, if you hadn't heard yet, Alberto Contador was caught with his hand in the doping jar back in July at that big race where he ended up wearing this yellow tunic-thing. He says it was from "tainted meat". Uh-huh. Funny thing about that. When I told my wife about it, who has a Bachelor's in Nursing degree, she about spit up! Not a very likely story here folks.

Well, we'll see if the authorities give him a hall pass, but if he gets treated like Floyd Landis was, expect the yellow tunic thing to go back to the store where it came from. And even if it doesn't, once again, you have had the rug pulled out from under you if you are a Tour fan. Remember how they said, "this is the best Tour in years"? (Just like they did when Landis won) Now it all seems like just another farce in a line of farcical July events in France.

Wrapping Up Interbike: Still tapping out stories about last week's Interbike show. Looks like I have about three more posts to go before I get that all wrapped up for another year, then it's back to "bidness as usual" round these parts. Fall riding is calling and I have much to catch up on.

Fortunately I have a great opportunity to do so scheduled for Sunday when I hit up the Rawland Fall Tour. I'll have a full report on the goings on Monday, if all pans out. I am really looking forward to this one!
Posted by Guitar Ted at 1:00 AM