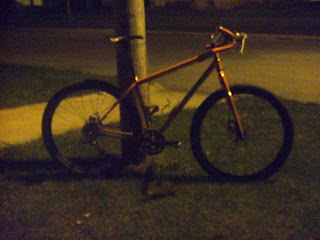 I didn't have a very productive cycling weekend. Saturday it rained practically all day and Sunday, while nice, was taken up by other activities. Well, that is until evening came around. Then it was time to start wrenching.

It's been awhile since this particular bike has been up and running. I pilfered parts from the original build of it, and it was in a rag-tag state of affairs. Probably still would be if not for another bicycle I have. That bike, a Salsa Cycles Dos Niner, has been through several incarnations since I acquired it a few years back. Thing is, no matter what I did to it, I ended up not liking the end result.

The Dos was just too flexy. It really started bothering me after I started in testing a lot of other bikes and learned that things could be so much better in terms of stiffness and 29"ers. The ol' Dos just couldn't measure up, so I retired it from active duty Sunday.

Knowing I was going to do that with the Dos soon, I started to think about the shifty bits on that Woodchipper and how I liked that. That led to thoughts of reviving this other bike. The more I looked at it and the more I thought about it, I figured why not? So, I tore one down and built the other up.

There still is much to tweak out on it. I have some brake work to do. I have to adjust the handle bar a bit, and probably three other things besides. Who knows. One thing is for sure though, and that is that the ol' animal lives again!
Posted by Guitar Ted at 1:00 AM

A perfect animal to compare a little with the new Fargo design.

great blog. We are from Brazil and like to ride a bike. congratulations on your blog.
Hugs from Brazil
Team off-road bikers