The Monkey Decade: Plus Three- It Is Finished! 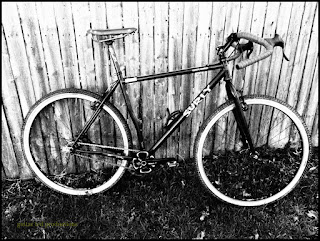 It has been a long, long time coming. The Karate Monkey is finally rideable again. This has almost been a rebuild of epic proportions, and I apologize for how this has dragged on and on, but I am pleased with the result. It's better than I could have hoped for, actually.

So, today I'm going to just detail the build here and there are some interesting pieces on this bike. Some old and some new. So, let's go here..... 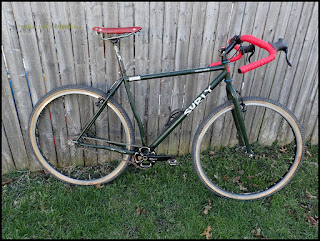 So, that's the bike and build. The frame, fork, and the head set are all that remain of my original build on this bike. Of course, I switched from disc brakes to rim brakes here, and honestly, with the way Surly did those original drop outs, I should have just gone this route from the get-go. Much, much less of a hassle to get the rear wheel out. Plus, it is lighter.

The seat post was convenient, but may get replaced. I don't know what I will/might get, but the thought of a titanium post is there. Same thing with the saddle. It is an unknown entity for me, as this is the first Velo Orange saddle I will have tried.

The skin wall tire look isn't everyone's cup of tea, but with the black anodized components, I think it looks great. The crank set may get replaced by a black White Industries unit so I can get back to my preferred for gravel 38T ring. I'll try this for a while then play around with some ideas for alternatives.

This will be the bike I plan to ride for this years Guitar Ted Death Ride Invitational, since this year will be a recap of the first GTDRI and this bike is the one I used back then. So, there will probably be a lot of tweaking and test riding going on with this bike soon. It's good to finally have it back up and running once again!
Posted by Guitar Ted at 1:30 AM

Very cool! I'm interested to read your long term thoughts on the Velo Orange saddle. I had the same one, and love the company (they are local to me), but it never "broke in" like a Brooks.

i think the velo saddle is the same as a Cardiff and if so , there is a material bonded on the underside of the leather that seems to keep it from breaking in. try and grind that material off to make the saddle a little more flexible

"Soma Gator Bar: Quite possibly the weirdest off road drop bar ever."

Agreed. Must have been a good, smoke-filled Friday afternoon session @ Soma Fab to dream that thing up. ;-)

Thoughts on how it works?

Great looking Monkey there! I love those Gen 1 frames. Plus, I'm a sucker for skin wall tires. They just look so right, especially with the green frame. How do the BG's roll on paved roads? Anyway, congrats on a fine build.

That handlebar does look weird. Any thoughts on it yet or are you trying to figure it out?

@Rob- "youcancallmeAl" is right. There is a layer of fabric to make the saddle look fancy bonded to the underside of the leather.

@Al- That's a great observation. I hadn't given thought to that fabric being a culprit in making the saddle stiffer. That makes a lot of sense. Thanks!

@John: BG Rock & Roads roll with very noticeable vibration and, I suspect, rolling resistance is high as well due to the tread pattern. This disappears on loose gravel and dirt where the BG R&R is much more at home. If you like the look and want a faster tire for pavement that still does gravel/dirt, check out the Soma Cazadero.

@Smithhammer @Daniel Lemke- The bars suffer much the same issues that a Salsa Woodchipper has- only worse! The hook is shaped much more like a ">" if you look at the bar from the side where a good bar like a Midge, Cowchipper, or Luxy Bar look like a sideways "U" from the side. Essentially, in my opinion, if the ramps and the extensions are parallel, (as in the Luxy Bar), or close to that, (Midge, Cowchipper) when viewed from the side, then you can get the extensions pointed more at the rear axle without having the hoods/ramp section sloping downward/forward. Vice versa, you can get the ramps more parallel with the ground without having the extensions point down to a spot in front of the bottom bracket on the ground, which essentially renders the extensions useless.

Hope that makes sense. I am going to do some imaging with graphics to help illustrate this more clearly. It is difficult to describe with words.

There are other issues with this design that I have, but in some ways, I can see where folks could justify its shape. Suffice it to say that it isn't striking me as something I am going to live with for very long.

If the tensile strength of that fabric is higher than leather, it wont allow the leather to bend as the fabric will resist the outer strand tensile stress.