This year Trans Iowa sponsorship news was late in developing, but it is shaping up to be one of the better years for riders showing up for the event. The big news this year is that, like last year, Trans Iowa finishers will receive a set of WTB Nano 40 tires. Only those who finish get this, but still, that's a pretty awesome prize right there.

Those are on their way to T.I.v12 Headquarters right now as I have gotten notification of their shipping out. However; that will not be all the tires we will be seeing from WTB at T.I.v12. Oh no......there is something else. A representative from WTB will be flying out to see us in Grinnell and he will have two sets of totally fresh, new, not available yet tires that will be held in reserve for the winning over all finisher, male or female, and the top female finisher. That's all I can say about these tires right now, but they will represent a brand new, gravel oriented tread design by WTB. Trans Iowa will be their US debut. How cool is that? Thanks to WTB for this great honor and for their continued belief in and support of Trans Iowa.

If you have been in Trans Iowa, or follow it closely, you probably know the name Mike Johnson. He is a multiple finisher of Trans Iowa, and this year he is doing something special with his fancy-pants 3D printer device. 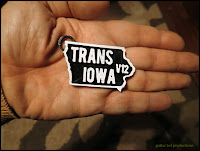 He is making these key fobs in black, (shown), and some in white as well. Every rider will get one in their Pre-Race Meat-Up bag. Hey, if'n ya don't like black, and want a white one, or vice versa, ya'all will have ta get together on yer own and trade. Whatcha git is whatcha git.

There will also be some random schwag stuffed into your bags. Some Salsa Cycles bar tape, from Pedal of Littleton. Not everyone will get some, so it will be totally random if you do. There will also be two BarYak Q: Prototype cue sheet holders that will find their way into the hands of two lucky riders at random. There will be some stickers from RidingGravel.com that may even be a new design, or maybe the old one. We'll see. There will be some tires- six sets, again, going in totally random sacks. There will be collectable Trans Iowa v10 shirts, and a few of the shirts last year's volunteers wore. I have to clear out the inventory! Sorry- you don't get to pick sizes. So, you'll have to do horse trading or give the shirt to your fat uncle!

Come to think of it, most of you will get some cool schwag.

Well, it sure looked good in March when the weather really warmed up, the snow departed early in the month, and the Sun shone a lot more than it didn't. Then April came and took two steps backward.

It has snowed, blown, rained, and been generally pretty ugly for more days than not so far. In fact, it started at the end of March, and there looks to be no reprieve in sight. In fact, we have a freeze warning for Saturday morning, because, ya know, by now we should not be having hard freezes anymore.

The freeze-thaw cycles have been so intense, and along with copious amounts of moisture, that the effects on the gravel roads, at least around here, have been negative. I rode a similar course as I did this past Wednesday a couple of weeks ago, and the roads have descended into a state of disrepair such that I suspect some big time road maintenance is just on our horizon. This plays into the upcoming Trans Iowa event, and we will either have torn up roads, or freshly graveled ones. I suspect the latter will likely be the case, but it may be that we won't, and here is where the weather comes into play.

We have a Polar Vortex that has shifted South from its normal haunts which means that weather in Iowa gets weird. We stay colder than we should, it stays windy, and we get more precipitation sometimes with that, especially in Spring. We had a similar situation in 2006 when T.I.v2 got washed out. While it would be foolish to believe a forecast for Trans Iowa v12 just yet, the days leading up to April 23rd and 24th and those dates as well have been solidly in the cloudy, cool, and wet realms on the extended forecast I have seen. Of course, all next week is supposed to be Sunny and warmer.

Okay, that's it for this week! Stay safe and get out and ride those bicycles!
Posted by Guitar Ted at 1:30 AM

Man that is so rad of WTB!

The gravels around Grinnell have been getting worked by the county boys, a lot (N,W,E - we haven't been South much), over the last 3-4 weeks. Lots of fresh rock has already been put down but some recent rains have smoothed them out, some... Expect more fresh grading issues than fresh aggregate for the riders... the level b's were dry/fast yesterday, one benefit of all this ridiculous wind! Good luck with your show, GT - looking forward to seeing WK's photos again this year!