The Six String Side: 1984 Hamer Blitz

When I started this blog over ten years ago, I stated that it was a "Bicycle and guitar oriented elixir....". Well, the "guitar" part sort of got pushed out by the bicycle stuff, but I've always been playing. In the Easter post, I mentioned playing my '90 Strat, and someone suggested I detail the fleet, so here ya go. Hopefully ya'll enjoy the change in pace. I'll post something periodically throughout the year. Here's #2

In this second of this series I am offering you a look at my 1984 Hamer Blitz. I am the second owner of this one. Here's the story on this particular instrument.......

1984. Hair bands. Heavy metal. I was 23 years old and in to all of that stuff. At this point in my life I had just gotten out of college for the last time and was working full time as a jeweler! Yep.... That's another story for another day. The thing was that I had no significant relationship going on with anyone at that time, so I was free to run around, check out bands, and listen to music. I played my guitars when I could. There was a back and forth between my home town of Charles City and Waterloo where I was living at the time, since most folks I knew at that point were from Charles City. This is significant to this story because of a band that was based in Charles City and its members were all from there. So, I knew all of them. Their band's name was "The Litterer Brothers Band", but by '84 they had shortened it to "The Litterer Band" , and then, just "Litterer". I was most familiar with their bassist, as he was my age, and one of their guitar players named Brent Estlund. 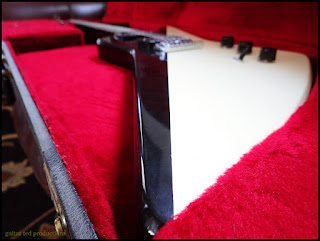 Brent had reached out to me asking if I had interest in a "like new" guitar he was wanting to sell. It turned out that the Litterer Band had just recorded an album in Catamount Studios in Cedar Falls, Iowa and they needed to raise some money to get the recording pressed and distributed. Brent had told me that the guitar had been used on the album and was purchased specifically to use on the recording, but as he had another, more familiar guitar to him, he was willing to "give me a deal" on this guitar. I first viewed it at Catamount, and when I saw it, I was blown away.

I didn't think I could afford it, but I always had wanted a Hamer Standard, which was the fancier version of this guitar, which was made famous by a member of my favorite band, Cheap Trick. I knew I could never afford a Hamer Standard, but I maybe could make this work. I arranged to make a couple payments to Brent, and I made the last one to him at his parent's house in Charles City where I took possession of the thing.

At first I was pretty happy that I had a "professional grade" instrument. It had been used on an actual recording by a working musician, after all! But there were some things I was not sure about afterward. I didn't know if I was all that in to the graphic design of the paint job. The neck was twisted slightly, which made certain notes fret out and the strings buzzed. The whammy bar, well....it wouldn't keep the guitar in tune, and the funky thumbscrews on the locking tuners were ugly and prone to bending and breaking off. I was in a love-hate relationship with this thing for about the first four or five years that I owned it. I wanted to like it, but I just couldn't.


I had finally decided that the whammy bar was a no-go for me on this guitar, so I removed the thumbscrews from the tuners, making the tuners essentially standard ones. I blocked the tremolo with a piece from a Jenga game as it fit behind the sustain block perfectly. The trem arm was another casualty of the work I did. But that darned neck! I didn't have the talent to tackle that one.

By this time, Bob Guthart had left the now defunct Music Corner shop and had opened a new place with a partner called "G&G Music". The problem was related by me to Bob, and he felt confident that he could fix it. So, I dropped it off with him and he did his magic. It was much, much better when I got it back, but still not quite there. So, I took it back, and Bob sent it out somewhere, which took about three weeks, as I recall, but when it came back, it was dead nuts. The Jenga piece had been removed by Bob, but he put it in the cubby in the case, so I still have it, along with all the removed hardware.

The Hamer Blitz was a "working man's" version of its flagship Standard model, and due to those crazy times, it was offered in a multitude of weird finishes like zebra stripes, weird striped graphics, and even American flag motifs. There were solid colors offered as well. Mine seems to be one of the more "tame" graphic designed finishes. The Blitz was a three piece mahogany body with a three piece mahogany glued in neck. Pick ups were "Slammer" pick ups made by DiMarzio. (NOTE- The "Slammer" import line did not exist at this time, so this is a USA made instrument.) Unique to this and some Dean Explorer models is that in the middle pick up selector position, the pick ups are out of phase to each other, giving you a quacky, funky sound which can be defeated by slightly backing off the volume controls. Bridges were, at first, Hamer designs, but late in the Blitz's production they went to a Floyd Rose locking bridge. Later Blitz models also featured "hockey stick" style head stocks which were all the rage then. Blitz models also were offered as four string basses.

I really enjoy playing my Hamer Blitz and it gets all sorts of comments now days. Explorer body shapes are odd enough, but the black-white scheme on my Blitz accentuates the angular nature of the body even more. I don't mind the paint job now and I, of course, would never change a thing about that. Through the years, all my pretending to be Rick Nielsen, bouncing around while bashing out chords to Cheap Trick songs, has rendered the finish on this one to be a little rough around the edges. The white is faded to a slight, creamy off white now. Not terribly so for a 32 year old guitar though!

And the recording that this guitar was used on? I actually own a copy of that LP. I often wonder which tracks I am listening to which have my guitar on it, but of course, it is entirely possible that none of them really do feature this guitar. Who knows? It doesn't matter in the end, as I have my "psuedo-Cheap Trick guitar" and it sounds and plays awesome.

Stay tuned for guitar #3 in the series coming along at some point in the future here.......

Labels: The Six String Side

I didn't know you were from Chucktown! That's my hometown as well, I recognized a couple of the names mentioned in this blog. May I ask what year you graduated? I may ask my parents if they knew the infamous "Guitar Ted".

@Zach Bonzer: I graduated in '79. I knew a couple of Bonzer kids that lived over in the 3rd Ave-E St area, if I recall correctly. I would run into those guys whenever I visited Darryl Trees to listen to his Dad's records.

Love this Guitar. What a gem. And your personal history with it makes it extra special.

As a side note, my first ever rock concert I saw was Cheap Trick in 1979. I was 16. It was their first show of their North American Tour at Alpine Valley in East Troy, Wisconsin. What a thrill to see Rick Neilson in person. The Pat Travers Band (Boom Boom Out Go the Lights fame) opened up for them. What a night!

@Doug- Thanks! I got to see Cheap Trick twice. They were warm ups for the headliners both times. Once was for Ratt!

Anyway, I also saw the Pat Travers Band with Foghat in 1980. Great show!

Fun to remember The Litterer Band. They had a great run in CF

My wife decided to "Google" me ...he he, and I notice a picture of a black and white Hamer that looks exactly like I guitar I once owned...upon clicking the on the image I was transported through a time portal..."that's my guitar!" ... she was less excited than I, lol. So "Guitar Ted", it would be great to meet up, and catch up sometime ! Look me up/ message on FB. Btw, yes, it's me...BE. ;)

@BE82- Ha! The dangerous "innergoogles" have conspired to hook us up again once more, eh? Cool! Great to hear from you. I hope all is well.