This past weekend was an odd one due to my son's football game being an away game and in Cedar Rapids, Iowa. This threw off my entire biological clock, I tell ya. I was way out of whack until later on Sunday. All that nonsense I used to do in my youth never helped me now, I know that much! Anyway, after eating very late Friday, then getting to  sleep on what amounted to early Saturday morning, I was pretty much out of commission in terms of getting anything significant done on Saturday proper.

But I did ride a bicycle. I just kept it in town and ran a bunch of side streets and recreational trail. Something to break up the constant diet of gravel road riding. Plus I needed exercise and to clear out the cobwebs from my brain from Friday's goofy schedule. It worked. The plan then was to do a bunch of new-to-me roads on Sunday.

Of course, well made plans sometimes get derailed and my Sunday plans were no different. I woke up to a day of pretty brutal Southeasterly winds and my right knee felt tweaked a bit, for some odd reason. So, I wasn't real set on my plan going into it, and especially so since I was using the opportunity to test some WTB tires I had on the Black Mountain Cycles Orange Crush rig. See, big wind + single speed = not a long ride. Maybe. I would see what I could pull off.

Due to the direction of the winds, and my reconsideration of what I maybe should be trying, I nixed the plans to bag more roads on my quest and just did a nice out-and-back. I just wanted to get several miles into the wind, then turn around and get the benefits of my labor. The starting point was Prairie Grove Park, since I didn't want to burn half my matches in just the getting to gravel.

The first pedal strokes from the car park were a reminder that the left pedal needs attention on the Orange Crush. I thought the pedal was worn out because it felt like my foot was slipping backward and forward as the crank arm rotated and I could discern a stopping point. It was as if the cleat was slightly too small for the clipping mechanism or, more likely, that mechanism was very worn. I mean, I don't think I've purchased new clipless pedals in over 20 years.

See, as a bicycle mechanic, you end up with extra sets of pedals. People swap out to newer stuff, higher end stuff, or they go back to flat pedals. Many do not want the old pedals and they give them to you. This has happened to me enough times that I have every bike that I want set up with clipless pedals set up with them, and I have pedals to spare. But don't get too envious. These are not anything great, They are base level pedals from Shimano, for the most part, and are beat to hell and back.Thus my suspicions about the left pedal on this bike. It was entirely possible it was shot.

Well, as I got going I was super annoyed by this loose feeling pedal, or so I thought it was my pedal. I looked down at just the right time and I thought I saw the crank arm move! What?! Not good here! So, I immediately stopped to more closely inspect things.

Well, it was bad news. My left crank arm wasn't just a little loose, it was really loose! Had I ruined the square taper? Dang it! My initial thought was to just roll back gently to the truck and bail on the whole ride, but....... Wait a minute. I had tools. Did I have an 8mm hex key? I dug out my tool roll. There was a good chance that I would have the tool, because this bike is pretty much my "Survive The Apocalypse Bike™". I had stocked it with more stuff than I would normally have on board some of my other bikes. I dug a bit and score! An old Trek multi-tool had the correct socket to convert a 6mm hex key to an 8mm one. Not much leverage, but........what the hey!

Well, I had nothing to lose here. Either the square taper was toast and my efforts would be shown to be fruitless, in which case I'd be heading home sooner than later, or I would get in some kind of ride. Maybe. The cases of loose left crank arms being tightened and staying tight after having been ridden loose are few. I had not much hope, but why not give it a try?

I torqued it on as well as I could, took off, and checked on the tightness about every two miles. I figured that with the high effort required to go against the 26mph headwinds, I would either find a loose crank arm real soon or be okay. The first check? Passed. The next? Passed again. I continued onward, but I was amazed that the crank arm had not come even a little bit loose with all the high torque I was putting into it. Checked again, passed. So, I figured on getting to Quarry Road, stopping at the bridge there, and doing one final check using the wrench and then coming home with the wind at my back. After turning around, I figured the crank force would be reduced greatly and I'd make it home no problem. 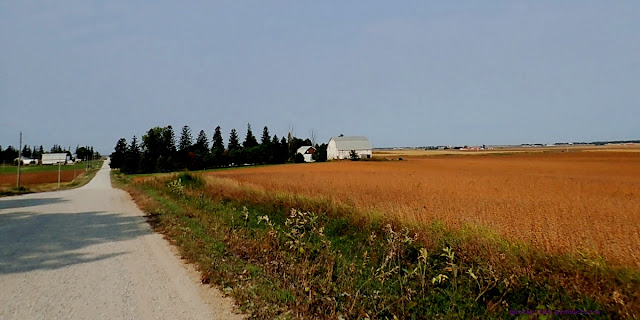 I reached the turn around point, broke out the tools to double check the crank bolt, and I discovered a combination 5mm/6mm hex key that would work to allow me to get even more leverage than I could with the multi-tool. So I fitted the 8mm adapter and reefed on the wrench and turned it a little bit more. So, it never got looser than I had it, but I was able to tighten it some more. Awesome! That never happens with a loose crank arm that's been ridden. Of course, it still could be bad, but at least I got my ride in.

The wind at my back was amazing on the ride back. I was flying! Even though the gravel was deep and chunky, the ol' bike was rolling pretty well. I made it back to the truck with no further incident. It ended up that trying to tighten the crank arm and to try to get a ride in was the correct decision, this time. But I am still amazed that I got that crank arm to stick with all the hard pedaling I had to do.

Now I'll pull that arm, inspect it, and if it looks alright, I'll torque it on with a proper torque wrench and see how it goes. Worst case scenario I have to go to another crank set. I think I'll live through this!

I was in a muddy MTB race (Iceman) and my left crank came loose with about 4 miles to go. Due to the mud, I couldn’t get it to seat properly trailside (plus not enough torque with a multi-tool). After stopping several times to re-tighten I gave up and finished the last half mile pedaling one legged (and a bit if walking). Now I am paranoid about crank bolt tightness!

I am glad things worked out for you.