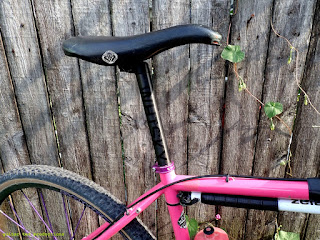 Note: Occasionally I will be struck as to the awesomeness of some part or piece that I use on my bicycles. This was the genesis for the idea of "Review Of Parts Past" where I do a review of a piece or part I use that, perhaps, is no longer in production or that I feel deserves more notice.

WTB SST Saddle: The first time I heard about the SST saddle was late in 1996 when word came out in some MTB magazine that WTB had introduced a new MTB specific saddle that was radically different than the then currently available fare. It was swoopy, curvy, and with that droopy nose, kinda weird looking. I decided to bite on an industry only offer to buy one of the first ones and placed an order over the phone to WTB directly. (Who does THAT anymore?)

Well, my SST came and immediately became my favorite saddle. My first one was a top of the line Titanium railed and leather covered one. Later versions had steel rails, sparkle covers in vinyl, and there were less expensive, Original Equipment versions which weren't really anything like the nicer ones. My suspicions are that the less expensive, OE ones were actually made in a completely different factory. (That's not uncommon, by the way)

My 1996 vintage SST saddle has resided on several bikes. It spent a long time on my OS Bikes Blackbuck, but recently has found a new lease on life on my Black Mountain Cycles MCD. In a mix-up with a review bike, I ended up with another leather covered SST, only this one has the Kevlar bumpers, and that is now on the Blackbuck. I have a sparkle SST, in gold, which I got from an old friend who sourced it off e-bay. That one was on the Fargo Gen I for ages until I removed it back a few years ago. That sparkle SST was the one I rode 155 miles on in the DK200 in 2015, one of my longest single day rides ever.

So, there's the history. Saddles are a very personal thing. You may not like the SST, but for me it works really well. However; maybe not quite as you might expect. I like my SST saddles a bit more 'nose-up' than most folks ever would. That is just the way I feel sat the best on them. And, obviously, it agrees with me and still does. Now I've gone off for other saddles since then, thinking I'd found "saddle nirvana", but the SST keeps satisfying my posterior the best. It's the shape, of course, and the leather versions are nicer for sure than the vinyl covered ones are. But none of that matters since they do not make it anymore.

Interestingly, the SST shape has informed many subsequent WTB saddles. You can still discern the drooped nose idea and "bellied" center section on saddles like the Pure V, the Silverado, and to a very minor degree, the Volt, which has since become WTB's most popular saddle ever. I love the Volt and Silverado, but I really wish WTB would re-introduce a vintage styled SST again. That would be a rad throwback!

I hear ya, Brother! Bring back the SST please!

I still have my original SSTi on my Slingshot that I mounted in 1995. I have many others on various bikes. All leather covers. Nothing matches the original tho. Waiting for them to do a special re-release like they did a few years back. I should prob pay more attention.

So true that saddles are a deeply personal thing. My favorite ever is a Selle Italia SLR. Looks completely impractical, but hits my "sit bones" just right. It is currently on top of my 32er SS. One of the rails cracked clean in two, but I slugged it and JB Welded it and it's still the one!