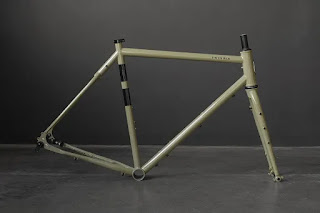 We got our Standard Randos, Andy and I, and then Twin Six comes along and does this. A limited edition color. "Shale" they call it. Andy was beside himself when he saw it as he wants that color over black. I told him, "They gotcha!" That's marketing for ya. Change the color and Bam! New demand for the same ol' thing. Tell me color doesn't matter. Just go ahead.....

But seriously, Twin Six has been doing this very thing with the original Standard Rando all along. The frame never changed, just colors. Surly Bikes does the same thing. Frame details very rarely change, but colors? This changes with the seasons, seemingly. So yes, of course color matters, or these companies and others wouldn't do this. I mean really- it is just paint. The bicycle fundamentally rides exactly the same no matter what color it is. But try and tell yourself you don't care about color. Go ahead..... I'll be here.....

It's genius and maddeningly successful. Part of me wants to laugh and part of me wants to stamp my feet in displeasure when Twin Six introduces another color of this bike. Just wait. I'll see whatever it is they do next and want that color too. It's crazy, I tell you. But I'm all right with the Gravel Bus. It's an awesome bike, so if you are moved by this bike in "Slate", well then, I say 'good on you". You'll love it no matter what color it is. But it matters what color it is. (I wonder if "Slate" is smoother riding?......ARRGH!) 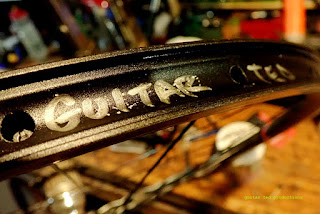 I was refreshing the wheels off the Black Mountain Cycles Monster Cross rig the other day, the bike I refer to here as "Orange Crush", and I had to replace the rim tape on the rear one. I then saw something which maybe I hadn't noted before. I cannot recall, but if I knew this I had forgotten all about it. The wheel builder had signed the wheels to me with "Guitar Ted 4-9-14" and added a smiley face and a peace sign symbol.

Ironically, that wheel builder's name is Andy Tetmeyer. I work for a different guy named Andy Tetmeyer. Yes- they are related. But that's another story... Andy from HED- let's call him that to keep things straight here- got a hold of me in early 2014 to see if I wanted to review the upcoming HED Ardennes+ wheel set. These were going to be HED's first gravel wheel set and, if you can believe it, the set I received was the very first set they made. Andy from HED laced them to Center Lock disc hubs with rim brake rims so I could use these either way. At that time, disc for gravel bikes wasn't a set-in-stone spec standard, so that made sense back then.

Anyway, these wheels have had several sets of tires reviewed on them and have logged thousands of miles. They are still as true as ever, I just checked them again this week, and still as smooth rolling as ever. Just an amazing wheel set from a time that is long gone, that being the rim brake days. Not that there is anything wrong at all with rim brakes, but you are not going to see new development into rim brake technology, not in general anyway. Too bad. I could stand a new, wide internal width, tubeless rim brake rim. 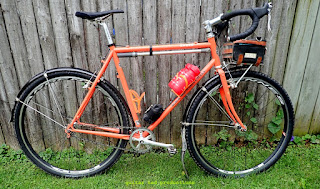 And The Bike Those Wheels Have Lived On....

Of course, the wheels mentioned above have spent 99% of their life on the BMC Orange Crush, now a single speed. I got those wheels refreshed, mounted up with tires, and took it out for a spin on Tuesday in the rain. Perfect! I have fenders and a single speed drive train. Bring on the bad weather!

I set this up single speed last year and I really just think it is a better bike as a single speed. I've got those long, 180mm Sugino cranks on this and that is a nice combination with the higher bottom bracket that the first generation Monster Cross frames have. I can pedal around a corner and not clip a pedal on anything.

I still have the Gevenalle mounts on the levers, which I can remove, but I haven't gotten around to that just yet. Otherwise this is set for the return of bad weather and Winter riding where a full coverage fender makes sense. I also got a Wolf Tooth B-Rad rail for dual bottle cage set up and a place to strap a repair kit on there as well. This sets me up for longer rides. The front bag? Not available anymore. It was a small manufacturer which made their bags out of the same material as convertible car tops along with real leather trim. It was a bit on the expensive side, as I recall. Something like $160.00 or thereabouts. But this thing looks as good today as it did eight years ago.

I wouldn't change much on this bike, really. Probably the only thing I'd try is a Brooks Team Professional saddle. I've got an old one I could try on there, I just need to recondition it. Maybe I'll get around to that sometime....

Since 2008 I have compiled a list of gravel events. First they were just the locally run ones, then I added nationwide ones, and eventually world-wide events were added. This started as a page on a separate blog I had dubbed "Gravel Grinder News", which eventually became its own "dot com" site in 2012. This eventually became a review site and was merged into Ben Welnak's RidingGravel.com in 2015.

The calendar at the time I merged with Ben's site had about 250+ entries. Since then it has grown to nearly 600 events, well.......that is until COVID came around. Since that happened in March, we froze the calendar. It just was too volatile a situation to keep track of at that point. So many events were cancelling, or postponing, that it was near impossible to devote enough time to it to keep it current.

Now with things running into the end of the year, and with no vaccine or real change in the situation, we are still left with a very volatile and fluid situation regarding 2021 events. With the amount of estimated work it would take to get the calendar even partially correct, Ben and I have made the decision to freeze the calendar for the foreseeable future. It will be a reference for when events were run pre-COVID. It is what it is. If I had all the time it took, (I do not) to fix the calendar, and if I had recompense, (I do not) for my efforts, I would undertake the monumental task of updating the calendar. However; at this time, frankly? It isn't worth my efforts.

Also- I do not think it will be missed. I never have seen any real feedback on the calendar, and what feedback I do get is from people thinking I (or Riding Gravel) run the events listed and either are complaining to me or asking questions I cannot possibly answer. So, that is another thing motivating me to back out of pursuing the calendar efforts.

There are other calendars as well. So, it isn't like I'm the only source for information. In my mind, the genre' is in good hands with those who are doing the work on calendars for gravel events. I wish those sources well, as it will be a very unstable situation going forward until major changes in the pandemic situation occur.

That's a wrap on this week! Get your layers out, fire up the lights, and ride!

If you've ever played pool on a slate table and then one had a less expensive MDF surface... you know that slate IS smoother. ;)

I don't care about color

That new All City Spacehorse color.

I spend many hours using the calendar as a starting point to find events. I can only imagine the PIA it was pulling in all that data, but it was appreciated.

A) I care a LOT about color. FunGuy Green. The orange of my La Cruz. The Gulf racing color scheme of my Cutthroat. I almost bought a 1st gen TwinSix Rando in purple, because purple. :)

B) Rim brake rims - Building up a set of wheels for my "new/old" Salsa La Cruz. HED Belgium C2 or C2 plus are on the short list. Good to know the HED rims have held up for you. Velocity is another possibility...