Saturday's ride had so many images taken from it that I couldn't share them all yesterday. Here I will post the rest with a few bits of commentary along the way. I hope that you all enjoy the scenery. Toward the end of the ride I think I grabbed some epic imagery, at least for me! Here we go.... 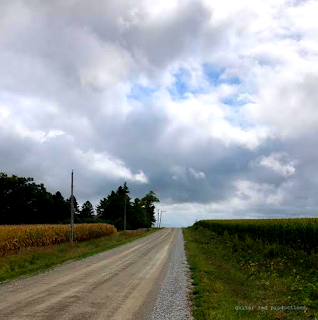 So, there ya go! That clears out the cache' of images from that ride. I was thinking about this as I worked up these images. This is the first ride in months that I have done which did not feature blue-bird skies or puffy white clouds. It's been a looooong time since I've ridden on a grey, poor weather day. So, I am not complaining one bit about the roads or the rain I endured.

In fact, I was glad it was this way. I have many things going on with review work that benefited from the poor conditions. One of those things will get revealed this week and I will share all about that later. Another item I have will have to wait until October to be revealed, but that will come soon enough.

Another ironic observation: We had months of super-dusty conditions this year. This must have finally gotten on the nerves of many of the residents of the country judging from the recent applications of soybean oil on several sections of gravel. The thing is, much of this was not there a couple of weeks ago. So, these folks paid to have this done, then it rains for four days straight, does what they wanted anyway, for free, and their efforts to mitigate the dust are made mostly a moot point. Ah! Well, at least they used soybean oil. They used to use petroleum based oil which obviously was worse than the dust issues.

Anyway, the other obvious thing is that there was zero agricultural activity. Too wet! This meant that I barely saw anyone out and about. There were the hog confinement guys, a few farmers in big 4X4 rigs, and that was about it with the exception of a few cars on the paved sections I had to be on.

Next up: I have to figure out another 'mopping up' trip to Northeastern Black Hawk County and knock out the rest of the roads out that way. Then after I get that cleared up I have to start visiting the area between the Cedar and I-380. Another truncated mess of stubs of gravel, Level B road, and dodging cars on paved sectors. I'm afraid this will be a not very interesting bit, but it has to be done.

Thanks for sharing the great photos, Mark. But, the header pic on the site this week is particularly outstanding. Definitely top ten ever. Nice work!

@fasteddy- Thank you! That header image was taken on an early morning ride when it was just about impossible to get a good shot. I was pleased to get this one to come out.