Continuing on with the weekend, I had made plans with Andy on Friday to ride with him Sunday. We had to get going on the review of the Viathon G1 Rival 1 bike we were supposed to be testing for RidingGravel.com. So, Saturday after the big ride I laid low as I could. However; I could tell I was pretty spent, as my legs were toast. That evening, I didn't sleep all that well either due to some gastrointestinal rumblings I am attributing to a drink mix powder I am also reviewing long term. Great. I had the alarm set for 5:00am and that was going to be way too early for this tired old dog!

In fact, my sleep was so disturbed that by 4:30am I was wide awake and so I ended up getting out of bed at 4:50am and started kitting up for the ride in the dark over to Andy's house. Conveniently, his home is a mere three or four blocks from the shop, so I was going to just use the familiar commuting route over to meet up with him.

The morning felt like a Gravel Worlds morning. I ate a little breakfast- not too much! I had a nice cup of black coffee too along with water. I was ready early enough that I could relax for a few moments before taking off. I thought back to Gravel Worlds and the nervous feelings of excitement and tension which always lead up to the start of that event. I thought about the gathering of friends behind the Schillingbridge Cork & Tap House. This would not be such a morning. It was just going to be me. Alone......

I hooked up with Andy and we used bike trails to reach gravel North of Cedar Falls on Ford Road. This was Andy's 'quick hitter' route he uses when he has limited time to squeeze in a ride. He has a little one year old and another on the way. With his business and family life, his time to ride can be compressed. The quick route suits his need for a ride from time to time. For me, it was a nice excuse not to go off on some long slog. I had to ride over as it was, so shorter was better for me as well. 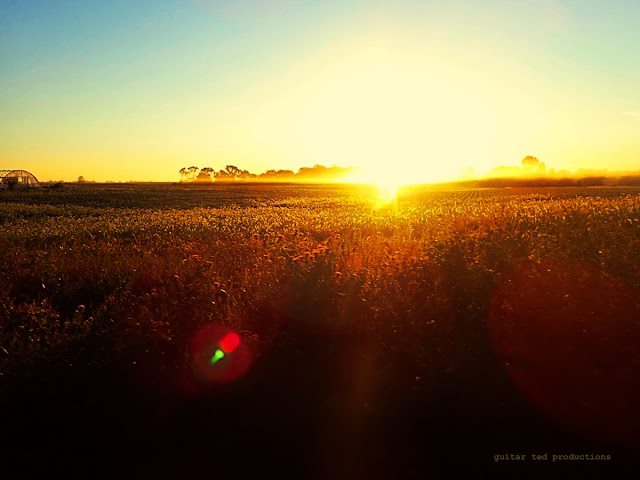 The morning turned out to be spectacular. We got out just as the Sun was rising. The air was thick with humidity, so shreds of fog hung in the hollows and above the corn fields in many places. Andy and I were treated to a handful of views, some of which I tried to capture, but failed to, that were breathtaking in their beauty. 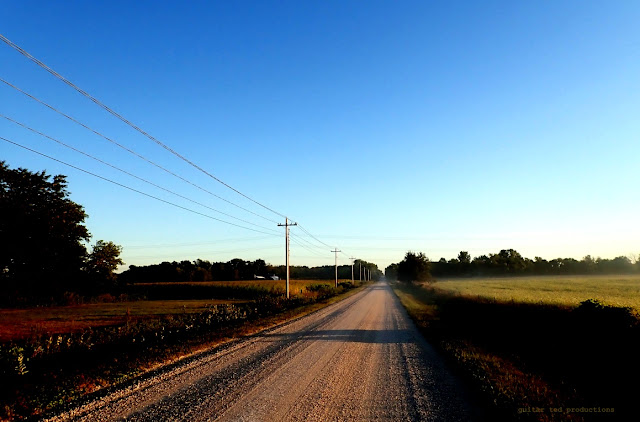 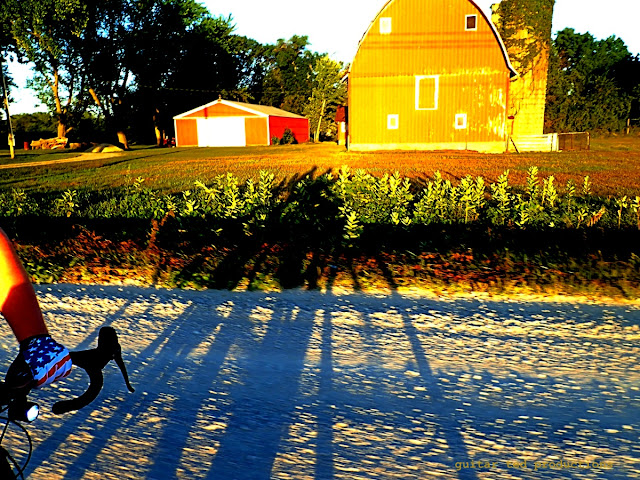 Eventually we reached old Highway 218 and turned around. We stopped at a few places to get some still shots for Riding Gravel uses. Then we slow-rolled back into town. Andy had a big day of activities planned. So, I took leave of him and made my way back to the Guitar Ted Productions Headquarters. That was the end of the day of riding for me. 31 and change more to the total from the day before.
My legs were barking at me pretty badly! I had gotten in over 85 miles of mostly gravel travel in less than 24 hours so that is no wonder. I ended up sitting around the house with the exception of going out shopping for a bit with Mrs. Guitar Ted. I did not regret any of it. This was one of those rare weekends where I had the good weather and the opportunities fall into place. How could i pass that up? Answer: I couldn't.
I am hoping that this Fall has more of the same in store for me. I'd like to was and repeat that a few more times, at the least, before Winter sets in.