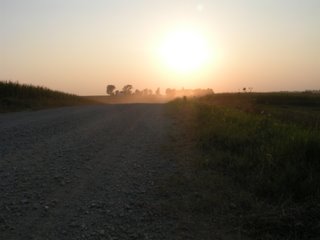 G.T.D.R.I. (or the Guitar Ted Death Ride Invitational) has recieved some actual outside interest! It would appear that I'm not the only nutty one out there!


Anyway.......since there seems to be a desire on the part of some of you to attend, I will breifly give you some details, as they stand at the moment.

As I mentioned yesterday, the idea is to be able to ride the course completely sans lights. This is going to limit the distance and make this a single day event, albeit an all day one. To help those that may need to have a low budget place to shack up for the nights previous to and following the grinder, I am trying to arrange the start at or near to the campgrounds at the local State Park. Camping is pretty cheap, or you can always sleep ghetto style in your vehicle, I suppose.

The course is still in flux at the moment, but once I nail it down I will produce maps based on the Dirty Kanza template. There will be a few cues included, mostly for town passages, but that's it- no course markings. That's too much work for one guy. Hey, if I can negotiate the course with my map, you can too. I may even post the route beforehand, if that helps anyone out. By the way, the photo above is from part of the course, if that matters to anyone. It was taken in August, so that'll give you an idea of what it might look like out there.

Cyclingnews.com has arranged a test of two "identically equipped and set up" mtb's in 26 and 29 inch wheel formats to test "scientifically" to see "which wheelsize is best" Already there are some holes here in the testing procedure and equipment that are going to affect the outcome of the test. I will delve more into that tomorrow. Suffice it to say that they have already pre-determined some of the outcome and alot of this is going to come as no surprise to me. In short, we aren't going to cover any new ground with this test, but you never know, maybe there will be a surprise or two. My suggestion is to go for a bike ride. It's far more entertaining than this comparo will be!
Posted by Guitar Ted at 5:45 AM