Answer To The Riddle 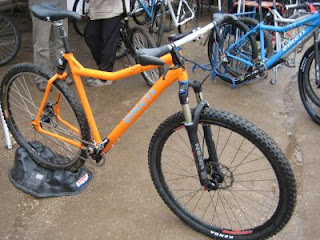 <=== The Siren "Song" as it appeared at the expo area at the 24 Hours of Old Pueblo recently.

You might recall my lame-o attempt at a riddle here recently. Well here's the answer. The new Siren soft tail model dubbed the "Song".

The Song is an interesting bike. With an inch and a half of rear wheel travel on tap, it should really take the edge off the trail in El Paso. It also doesn't have a pivot in the traditional sense. It has a flex plate made of titanium bolted onto the bottom bracket and chainstays. Low maintenance and durability are some of the design goals with the Song. This one happens to be a single speed 29"er, but it can be had in a mixed wheel format called the "fifty-five" or as a geared bike in either full on 29"er or fifty-five options.

I got word yesterday that this particular Song is "in the mail", so I'll be looking for it to show up here soon. I'll be riding it pretty much as pictured here with the exception of my using an I-9 wheel set I have with those new Continental tires.

I'll have some pics of the bike once I get it set up to go later next week.