Gloves On The Cheap and Other News 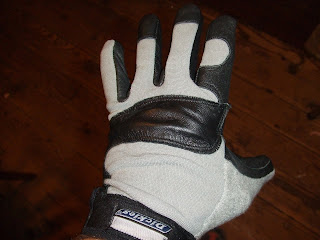 Just before I left to go to Texas I went shopping for a pair of Mechanix gloves or an equivilant since my hands don't like typical cycling gloves.

I saw these and got them for about $16.00 or so. As a work glove they stink! I mean, how fast do you think that terry cloth thumb area will fill up with grease and dirt? About what.........three seconds? But as a cycling mit it is pure genius. I bet Dickies never dreamed of these as a mountain biking glove. 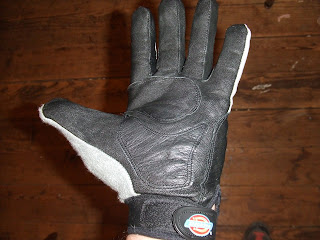 I searched and found out that the actual company making these for Dickies is some outfit called Fortress. Mmm-kay, whatever. They are cheap and they work...........for me. I don't like cut off finger gloves- make my hands go numb. I don't like a lot of palm padding either, so these fit the bill for me.

Heck, they even do a color
Mr 24 would be proud of!


Trans Iowa Recon........no really! Seriously! Yes, it has been said before but T.I.V4 recon is upon us for real this time. It has to be! There is only a month to go till this beast gets going and we have to get our ducks in a row........fast! (Now watch...........we'll have some freak winter blizzard this weekend because I wrote this!) If and when this happens, (it will) I will post a report and maybe a pic or two. Stay tuned. I am not going to promise anything at this point!

No More Waiting: I posted this on the T.I.V4 site already, but I'll post here as well. The "waiting list" is being shut down. With only a month to go I am finding more people have moved on to focus on other events and the impending work load of T.I.V4 is weighing heavily on my decison to shut it down. I just won't have time to dedicate to taking care of that list anymore. If you were on the list, thanks for your patience and I hope you try again next time.

The Dirt Be Shapin' Up: It's looking as though offroad is going to be happening sooner than later. Winds and fairly dry weather are conspiring to make the dirt shape up pretty fast. I was thinking it would take a long time for this winter to shake off but it appears that we are well on our way to riding dirt sooner than I would have thought possible. I'll be doing some exploratory poking around in town here and others are going to be peeking here and there in the woods to see how things are coming along. It won't be long though, I'll bet, and we'll be out riding the trails again.
Posted by Guitar Ted at 5:41 AM