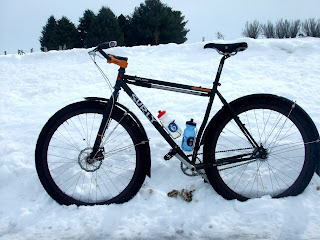 <===I busted through some drifts, but none this big!

I took Saturday off from riding as I was feeling really beat. In fact I took a rare mid-day nap I was so tired. Sunday was better, so I hit the trail with the KMFDM to see what it was like out there.

The temps were in the 40's and the snow was melting like crazy. I found the bike path leading out of town southwards and followed it. I noticed I wasn't the only one that had the idea to ride as I soon discovered two other sets of tracks in the melting ice. Soon I discovered that the snow had drifted across the path in various places. Sometimes a bit more than a couple feet deep. I could see that the two guys ahead of me, (I could see them by now) had been busting through most of them and I was having no problems with them myself. I just did it like we used to back in the day. Go really fast, hit that drift, come out the other side going much slower, but still going. (Only we did it in cars back then!) 29 inch wheels were cruising through those drifts with no problems.

I finally started to reel the two guys in front of me in. They saw me coming at Shaulis road and waited for me to roll up. I hadn't met these two fellas before, but the were locals and we chatted for a bit before they turned back and I went on across the highway on Shaulis. I turned onto the old chunk of 63 shortly before hitting a gravel due south. I wanted to check the conditions of the rural roads. 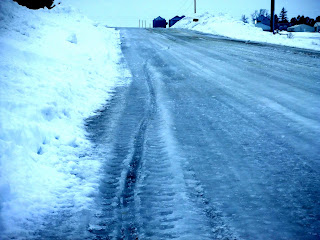 <===If it wasn't covered in melting sheets of ice, it was saturated with water.

I found the going extremely tough. Where the snow and ice was gone the gravel was saturated. I am talking Trans Iowa V2 saturated. I was pushing into the surface about three quarters of an inch deep with 2.1" wide tires on. The ice covered sections were actually much faster.

It's going to be awhile before the gravel shapes up too because we just got more rain, then snow on top of it and it all has re-frozen since it's 21 degrees as I type this. Yeah, it's still a mess.

I turned back into town northward and once I got into the city I found rivers of water running over slush over ice. Great! Slow going as I picked my way through some of Waterloo's southern neighborhoods. I saw lots and lots of folks chipping ice out of driveways and sidewalks, just like Carlos details on his blog.

We saw a glimpse of spring yesterday, but today it's the same ol' same ol' wintery crapola again. Two hour delay for schools so I'll be late getting to work. Seems like Mondays have been this way for awhile now.

Anyway, it was great to at least get in a ride yesterday, but I have to say that two hours of not coasting is pretty brutal on the ol' hind end. I'm thinking a Brooks B-17 is in my future for the KMFDM.
Posted by Guitar Ted at 6:53 AM