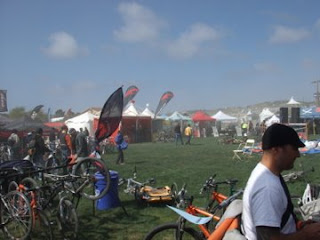 <===Wind wasn't the right word to describe this!

Well, I'm back from Sea Otter and I'm bushed! Yesterday was pretty spectacular for several reasons. first and foremost, it was dang cold and super windy! Things came crashing down, poles were snapping off, and cows were seen blowing through the air. Well.......I made that last part up, but really, it was bad! 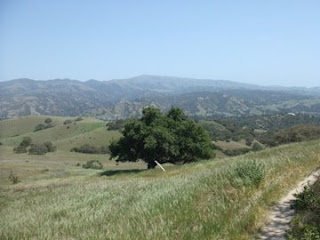 <===A view of the hills from the single track we rode at Laguna Seca.

I did actually get to ride this time around. Jason Boucher, Tim Grahl, and myself toured the 10 mile loop. It was super hilly, fast on the down hills, super tough climbs back up, and very dusty and windy. (there is THAT word again!)

I was flabbergasted while pushing up one of the steepest slopes into the crosswind when my bike flipped up off the ground due to the force of the winds. It was as if we were about to be blown into Nevada, or something. Crazy! I've ridden bikes in wind stronger than this only once and it is kind of scary. We made the best of it though and had a great time anyway. 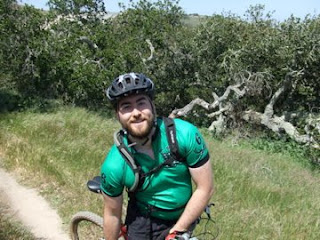 <===Tim as we waited during a "nature break"

The ride really worked me over. I sure hope Kansas isn't this windy when I ride there in May. Strangely enough, the grassy hills bore more than a semblance to those Kansas Flint Hills.

I was glad to get a ride in California in again. That's two years in a row now for me. The riding is so different there, and I am not used to it, but I'd like to be! 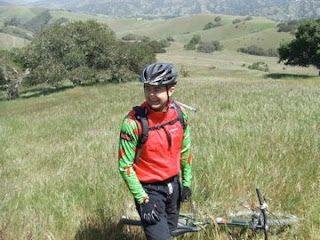 <===Jason is all smiles after his little stop. How do you spell relief!

It was great to ride with Tim again, which rarely happens since he lives in Virginia. Of course, watching Jason shred is getting mind boggling. He is fine tuning his health and it is showing. I know he won't admit this, but he is super fast!

So, I'm all back home again, I think. I don't know.....maybe some of my marbles got blown outta my head there yesterday! 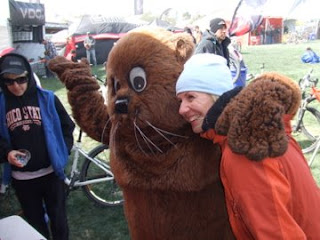 <===I will leave you with this image of the Sea Otter. Say Cheese!

Now it's time for Trans Iowa.