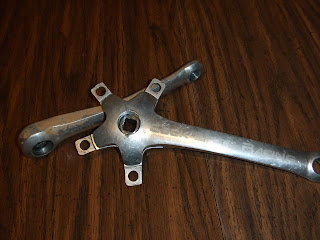 Arleigh Jenkins and I both worked Sea Otter together for the Crooked Cog Nation and whilst we were there the cranks she had sent me showed up at home. Vintage Cooks brothers that will go on my Pofahl single speed. The Profiles on it now will go out to Arleigh who needs 'em for some testing. Always help a bike friend in need, ya know?

While not really schwag in the purest sense, it qualifies as something pretty cool, so I put it up here anyway. 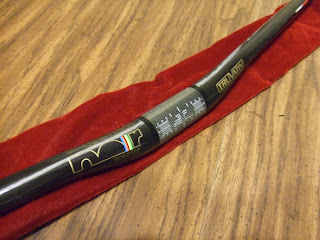 SRAM had a press conference: a two hour long press conference! They introduced a whole slew of new products including a bunch of new handlebars. Well, if you were patient and stayed the whole time you were rewarded. I got these sweet new Noir carbon bars. Yes......they came in the plush red velvet sleeve!

Elvis would be proud! 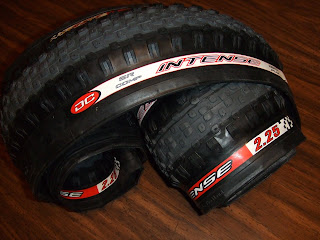 Arleigh strikes again! Yeah, she is pretty relentless on the 650B front and while asking about the wheel size at the Intense booth she mentioned Twenty Nine Inches. The Intense guys wanted us to review the tires, so here we have a set to get aquainted with in the coming weeks.

I also got other stuff, like your t-shirts, shot glass, (may come in handy at T.I.V4!) ,stickers, water bottle, and some other sundry items. I try to only bring home the really cool stuff, cause you can get too carried away. I mean, how many water bottles do you need when your cupboard is filled already with them? Anyway, I didn't expect to be bringing home this stuff, so I am very grateful.

Look for reviews on the bars and tires soon. Plus, I actually bought and paid for some Endura Humvee 3/4's and a short sleeve Halcyon wool jersey. I'll be writing some stuff about those soon too.