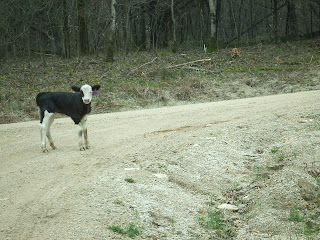 <===In keeping with the T.I.V4 header theme, I saw this while scouting the route Friday.

"If we don't get anymore rain, I think we'll be okay", I wrote d.p. in an e-mail Thursday afternoon. Well, those turned out to be the proverbial "famous last words" as we got a thorough dumping that night of Biblical proportions.

d.p. had so much water at his place on Friday, he couldn't get out of his driveway due to the water in the street. We both had water in our basements, (as did a lot of you out there) and we both had an event to put on that required us to be at T-Bock's in Decorah by 3pm on Friday afternoon.

Not much time to do a whole lot.

So, I did an emergency drive on the first section of the course. I figured that if we were to be able to even have a start to the event, I needed to find that out right away. Thoughts of cancelling the event all together were very real as the flood waters were spread across miles of usually dry Iowa farm lands.

I found that all of the course that I could drive was still dry. It was apparernt though that we had just barely escaped having to cancel T.I.V4, and of course, I could only look at the first quarter of the event. The low water crossing of the Turkey River was the only place I had to make a go around, and that was easily taken care of. I barely got into Decorah by 3:00pm to meet up with some of my volunteers and check in with the fine folks at T-Bock's who were preparing our pre-race meal of spaghetti with homemade meat sauce/vegetarian sauce.

The gal that made the sauce had started it that morning at 10am and had me test taste the two sauces to make sure I liked them. Huh? You'd have thought I was somebody important, or something. Weird, I thought, but the sauce was excellent, so I gave them the thumbs up. 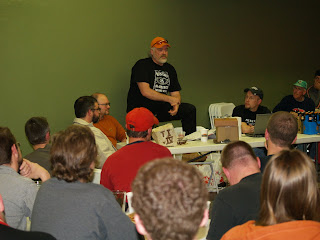 <====Doing the pre-race. Not my favorite thing to do, but somebody has to do it, right?

I had help stuffing the race packets, the least stuff we had ever put in those bags for any T.I. , and then folks started trickling in. We had a very successful pre-race meet up, judging by the disappearing food and surprising amount of beer drank. I saw a lot of familiar faces and made some new contacts as well. The pre-race meeting was fine. I had to explain the work around at the Turkey River. I showed the guys the tape and told them how to read the signs we were going to put up. When I asked if they all understood that, I got blank stares. Silence. Well, I found out later that my specific instructions were lost on some of the folks, or completely forgotten. More on that in another post, but it would be an important part of things down the road in the story of T.I.V4.

Next: The Race Starts!
Posted by Guitar Ted at 5:59 AM