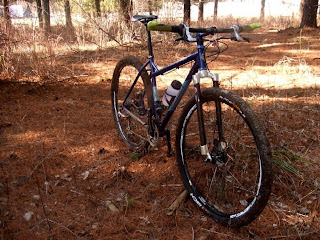 <===El Mariachi with the Conti Race Kings on board.

The day was great at the Camp. Sunny, cool, but very nice. I was out to test the Conti Race King 29"er tires that I have in and also the Geax Barro Race tires which I had mounted on another set of wheels. The Continentals were on the FSA wheel set in for testing. So yeah.......it was work mixed with pleasure!

The trails had firmed up quite a bit since Wednesday and Captain Bob had been out grooming them a bit, so the first technical part was fast and hairy! I went in to a little change up Captain Bob threw in a bit hot and about lost it, but it was all good. The Continental tires were surprising in that they gripped the loamy dirt like Velcro. Plus they were fast anyway, so speed was easily attained and that got me a bit over my head at first too.

I had to go down along the Cedar and check out the eagle's nest. Man! This thing is huge! I heard that there were a couple new eaglets there, and I did see a mature Bald Eagle sitting in the midst of the nest. Very cool. I left that spot and headed for higher ground in the Pines.

After glopping through a couple mud bogs, I got out of the Pines and went on my way to where I saw the wild turkey last Wednesday. I didn't see a turkey, but I did scare up a large Barn Owl that took to flight from a branch right above my head as I passed underneath it. Its wings moved a lot of air and I could hear that it was a large bird before I actually saw it. No pictures though. Too wary of a bird. It wouldn't sit still long enough for me to get a shot before it flew off deeper into the woods. 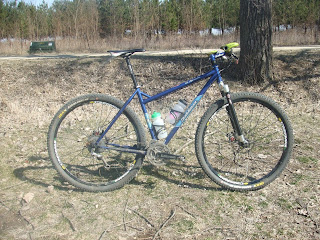 I then made my way back to the "Dirty Blue Box" for the wheel swappage. Once done it was back out to the climb up the service road and down the switchbacks of Broken Finger Trail. This time I knew what to expect and raged the entire section. It was good. I then noticed a creaking. Rats! Eccentric bottom bracket? Crank arm? I dismounted and checked. Hmm........left arm is good. That's the one that usually comes loose on you. Checked the right side......wha..??? It was loose! Drats! I headed gingerly back to the car and ended the ride before I did any permanent damage.

I was a bit disappointed, but it all turned out for the best anyway. I got home at an appropriate time to get a few things done that I maybe wouldn't have if I had slogged onwards at The Camp. There will be other days too.
Posted by Guitar Ted at 1:00 AM